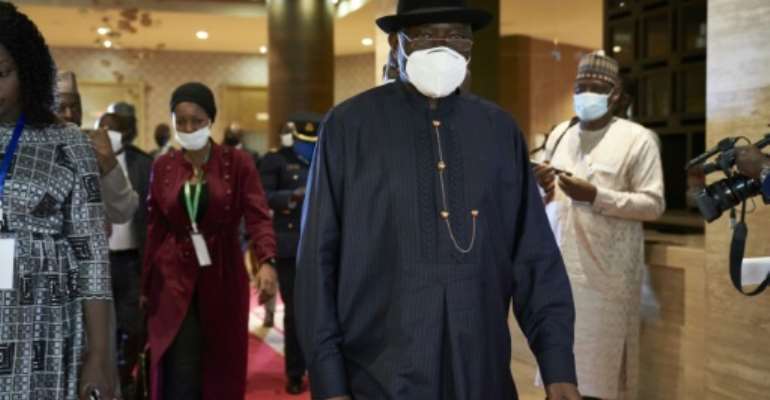 The envoy from the West Africa bloc ECOWAS made a surprise visit to the poor Sahel state on Monday on the eve of opposition-led demonstrations against embattled President Ibrahim Boubacar Keita.

Speaking at a press conference in the capital Bamako that evening, Jonathan said "demonstrations do not solve problems per se" and talks would resolve the crisis.

"Encouraging more demonstrations is just exposing young people to big risk," he said. "People could die in the process".

His appeal came after the opposition June 5 Movement rejected ECOWAS proposals to end months of political crisis and vowed to stage fresh protests on Tuesday.

The group has been channeling deep frustrations in Mali over a dire economy, perceived government corruption and a brutal jihadist conflict.

Last month, 11 people died over three days of unrest following an anti-Keita protest, in the worst political strife the country has seen in years.

Heads of government from the Economic Community of West African States (ECOWAS) stepped in, suggesting on July 27 the formation of a new unity government, among other measures, while sticking by Keita.

The June 5 Movement has continued to insist on the 75-year-old president's departure, however.

The impasse is alarming Mali's neighbours and allies, who are keen to avoid the former French colony of some 19 million people sliding into chaos.

Swathes of the country's territory lie outside of the control of the government, which has struggled to contain a jihadist insurgency that first emerged in 2012 and which has claimed thousands of lives.

The conflict has since spread to neighbouring Burkina Faso and Niger.

On Monday, Jonathan said that he had pleaded with influential imam and opposition figurehead Mahmoud Dicko to "be a bit mindful about encouraging demonstrations".

"You can start a demonstration but you will never know how it will end," he said.

One of Jonathan's staffers told AFP that the ex-president is due to meet Keita and members of his political party on Tuesday.