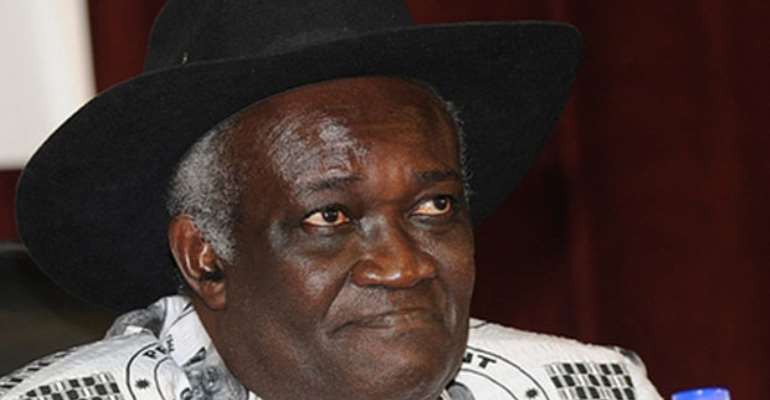 Professor Kwamena Ahwoi's book, Working with Rawlings, appears to describe ex-President Flt. Lt. Jerry John Rawlings as somebody who did not know some of the things he was doing as a leader of Ghana.

He said in the controversial book that the National Democratic Congress (NDC) founder did not appear very deep “philosophically and ideologically.”

“In my encounters with him (Rawlings) at PNDC meetings, I could tell that he did not understand many of the very technical issues that used to be debated. Often times, he would feign disinterest and be looking through the window or playing with his toy planes,” Prof. Ahwoi fired on page 232 of the book.

He also said that “but once he got a sense of the direction of the meeting, he would jump on board and ensure the implementation of the decision or the policy.”

He described Mr. Rawlings as somebody who had an obsessive desire for power and went to talk about how the former President did not even want to let go of the Provisional Nations Defence Council (PNDC), a military junta which metamorphosed into NDC during the transition into constitutional rule culminating in the formation of the Fourth Republic.

“It was not easy convincing Jerry Rawlings to return the country to civilian constitutional rule. He seemed bent on continuing the revolution, while some of us, his advisers, were convinced that in that period of the late 1980s and early 1990s, both the internal and the international situations argued for a return to constitutional rule.

“Internally, the agitation for constitutional rule had reached a crescendo and a coalition of the middle classes and professional groups was agitating for a return to constitutional rule. The pressure on the PNDC was huge and intense,” the book stated.

He said in the book that when you know Mr. Rawlings from afar, “He has charisma, and therefore easily endears himself to people who met him for the first time,” adding, “On first meeting him, his personality is so overwhelming and all-pervading that it is easy for one to be in awe of him. He speaks well; he exudes confidence and is very conversational, even though he sometimes tends to dominate conversations.”

He, however, said, “Philosophically and ideologically, he does not appear very deep,” adding, “He is no Kwame Nkrumah, but in his own way, he has a dominating personality, mesmerising and nearly hypnotising his first time listeners and audiences. That is the image of Rawlings as established at the first encounter with him.”

Although Prof. Ahwoi said Mr. Rawlings “is a born leader,” he comes back to say that the NDC founder was vindictive.

“When you get to know him better, it is a different matter. He can be

domineering, vindictive and fearsome,” he said, adding, “The nearest analogy will be the Akan proverb about the bird “santrofi” or night jar, in English, belonging to the family, caprimulgidae, which proverb states that 'santrofi anoma, wokye no a, w'akye mmusuo; wo gyae no a, w’agyae adee,’ loosely translated as 'the night jar bird, if you catch it, you have caught a curse; if you let it go, you have let go of something precious'.”

Prof. Ahwoi also said that “Rawlings has a very attractive personality when you first meet him. He shows results because he is a very hard worker and therefore it is good not to let him go when you have him otherwise you would have lost something precious.”

He however said, “On the other hand, he can be a very divisive character who is incapable of keeping and sustaining friends. Once he is your friend, he would like his enemies to be your enemies and therefore if you keep him, you would be keeping a curse, as his enemies will become your enemies and will curse you forever.”

“The other positive attribute of Rawlings is that, as a leader, he is decisive. He is the type of leader who would say 'I want a one-handed economist. I do not want the economist who will confuse me with 'on the one hand and on the other hand'. But even if you present yourself as a two-handed economist and he chooses one of

those 'hands', you can be sure that he will go with that hand all the way. He is also the type of leader who would not like advisers who would give advice on the basis of “all things being equal”, knowing very well that in this world all things are never equal,” he stated.