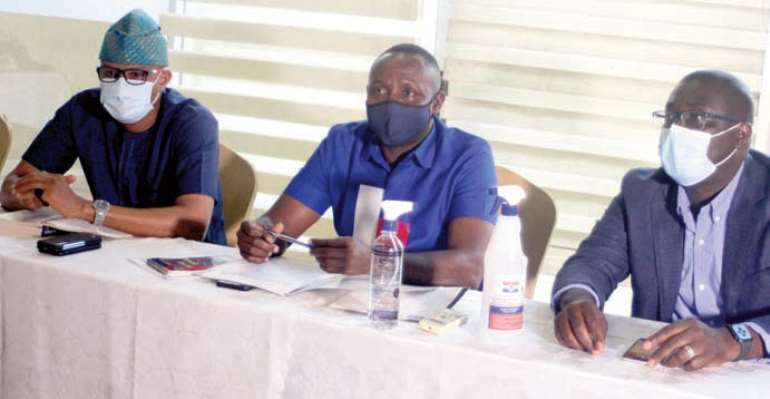 The General Secretary of the ruling New Patriotic Party (NPP), John Boadu, has descended on the opposition National Democratic Congress (NDC) flagbearer, John Dramani Mahama, for what he describes as his adoption of a 'hate for votes' as his campaign strategy.

Addressing a press conference yesterday at the Alisa Hotel in Accra to state the party's position on the just-ended voters' registration exercise, John Boadu berated what for him is the cornerstone of the NDC flagbearer's campaign strategy of pitting one tribe against the other for electoral leverage.

The tribalism ruse, John Boadu said, is intended by the NDC to create schisms among the country's ethnic groupings, adding that the NDC has been playing the tribalism card for many years, but it will not succeed this time around because the public is wide awake.

“…But what he should know is that he (John Mahama) cannot fool Ghanaians with this 'hate for vote' campaign…” he pointed out.

He said Mr. Mahama and his NDC's main message for the 2020 election is tribalism, and they cannot show any serious policy alternative.

This remark comes on the heels of the recent claim by the former President that the NPP is 'misusing the military' in reference to the deployment of soldiers to the border areas to enforce the presidential shutdown of those areas as part of anti-Covid-19 measures.

In a manner falling short of inciting the people in a veiled manner, he told party supporters in the Volta Region during a visit recently that “I have been briefed on what is happening and I will continue to urge them to exercise restraint. We know the intimidation that is going on and how it has affected their livelihoods because they cannot move freely on their own lands, but I still ask them to exercise restraint and encourage them in their numbers to come out and register ahead of the 2020 general election.”

John Boadu demanded of the NDC flagbearer to apologize to Ghanaians for creating fear and panic in the country.

The NPP scribe told the media that the vigilance of the party stopped ineligible persons mostly foreigners from registering to vote in the country.

Thumbs Up To EC

Giving a thumbs up to the EC for a job well done, the NPP the General Secretary said the party had been consistent in stressing that the old voter register was defective and not fit for the purpose of being used for elections. “One of the issues we had with the old register was that it was bloated,” he said.

“Indeed, the numbers from the current register vindicate that position. Until recently, the EC had always disagreed with us on our position that the register is bloated. Indeed, after we mounted pressure, the EC, under the then Chairperson, Madam Charlotte Osei, empanelled the late Justice VCRAC Crabbe and others, in October 2015 to hear proposals, collect and collate views from the stakeholders, analyze the views and make recommendations to the commission,” he said.

In their report, the Crabbe panel vindicated NPP's position that the register was bloated, he recalled.

“The panel established that the old register contained several categories of ineligible registrants, including multiple registrations, names of minors, names of foreigners and deceased persons,” he noted.

After its analysis of facts before it, the Crabbe Committee, he said, stated in page 10 of their report that “there is evidence that the register of voters contains a substantial number of people whose names are currently not valid. By all indications, the number of registered voters is not only unusually high but also it may be in excess of the potential number.”

“Based on the 2012 projected population of Ghana, provided by the Ghana Statistical Service, and discounting the population of foreigners, there were about 150,000 more individual records in the register of voters than the 2012 estimated population of persons aged 18 years and holders of Ghanaian nationality. This would include some thousands of minors who were wrongly registered” he pointed out.

On the issue of dead people in the register, he recalled that the committee observed on page 14 that “further analysis of data, based on the reported number registered in 2012 and 2014, shows that as many as 580,000 estimated number of voter deaths would have occurred cumulatively by the 2016 elections and may well remain in the register of voters. It is not clear how many of these deaths have actually been identified and their records expunged from the register through the established procedure.”

In effect, the point the NPP is making here today, he said, is that “the fact that the old register is bloated cannot be disputed. Eventually, the EC itself decided to compile a new register.”

Had the commission maintained the old register and conducted a limited registration exercise in all electoral areas and registration centres across the country, he said “we would have estimated to conservatively add about two million Ghanaians on to the existing register.”

In a country where the outcomes of general elections have sometimes been determined by less than 50,000 votes, three million illegal registration entries or votes make a significant impact on the integrity and credibility of elections. Indeed, the VCRAC Crabbe panel made this point as well as the NPP.

The NDC flagbearer who fought against the compilation of a new voters register has admitted that the exercise has been successful.

“I think the exercise met our expectations… [Over 16 million registrants] are within the range that one would have expected,” he said during an interview after the curtains were drawn over the exercise.

He reportedly said that “initially we had strong objections to compiling a new register. We believe that we could use the old register because by ages of registers it [the old register] was still relatively young and because we had not done the population census, we said that 'why don't we use this one and if we do the population census we will have an accurate data and then we could go ahead and do it,” he explained in the interview.