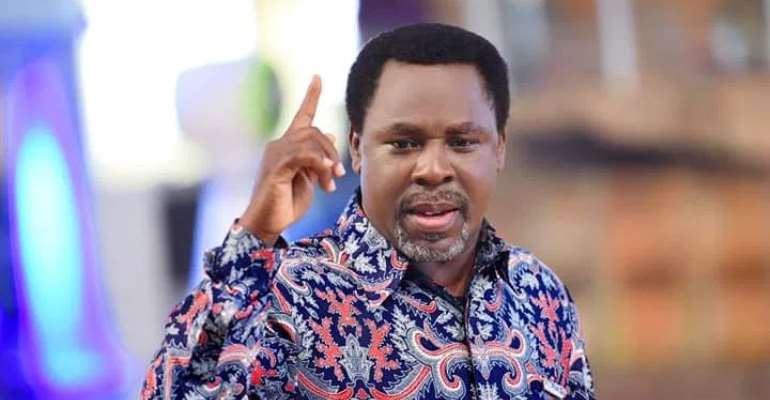 A popular Nigerian televangelist, Prophet T.B. Joshua, has vehemently debunked media reports that he has prophesied about the outcome of the December 7 presidential election in Ghana.

The leader of the Synagogue Church Of All Nations (SCOAN) based in Nigeria has ordered those that peddled the falsehood to quickly retract the false information or be cursed.

“If you don't retract this, the Holy Spirit will judge you,” an angry-looking T.B. Joshua cautioned those faceless people behind the false prophecy report on Ghana's election in a press statement.

He lamented how some people, perhaps with a grand agenda to defame him, had been unjustifiably using his name to promote themselves.

According to him, he has consistently suffered from blatant falsehoods and blasphemous acts by his detractors, whose main agenda is to tarnish his hard-won reputation.

He wondered why some people, especially in Ghana, had strategically decided to run him down by linking his name with false and unsubstantiated prophecies, adding “the same thing happened in the past.”

The popular Nigerian prophet asked his faceless detractors, “What will you gain from this?”

He warned his detractors that peddling lies about a man of God is a sin. “What you did not hear from a Prophet of God and you claim he said it is a sin against the Holy Spirit (sic),” he pointed out.

With different quotations from the Holy Bible to buttress his assertion, he admonished his followers, especially those in Ghana, not to believe the lies being peddled about him.

“God requires that we find and hold fast to that which is true as the Bible says in 1 Thessalonians 5:21,” the prophet stated, adding that the falsehoods about him should cease.

He stated emphatically that Emmanuel TV is the official mouthpiece of SCOAN; therefore, “if you don't hear it on Emmanuel TV, please disregard it.”

“Do not sit somewhere, hear this or that and come to a hasty conclusion. I have not said anything concerning the upcoming elections in Ghana,” T.B. Joshua reiterated.

Takoradi woman confesses she was not pregnant
25 minutes ago