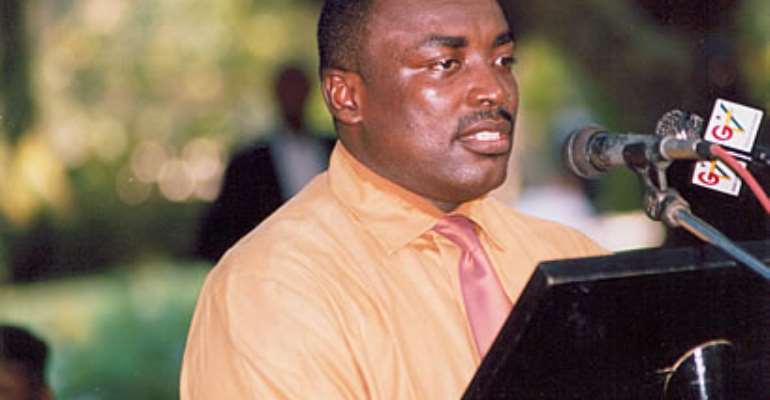 The New Patriotic Party (NPP) presidential race is gradually swelling by the day with the entry of former Presidential Spokesman and Press Secretary to the President, Kwabena Agyei Agyapong.

The Accra-based Daily Guide newspaper says it can confirm that the former press secretary to President John Agyekum Kufuor is seriously interested in succeeding his former boss if the NPP gives him the nod to represent it in the 2008 elections.

Sources close to Mr Agyapong said he would soon unveil his presidential ambition at a news conference. Even though much has not been heard about him since his left his post, the sources said Mr Agyapong was serious about leading the country.

The former presidential spokesman, a Civil Engineer by training, is mostly known for his media work, especially sports commentary, which earning him the press secretary position in the Kufuor Administration.

He recently resigned from his post, perhaps to enable him concentrate on his presidential ambition. Mr Agyapong contested for the NPP vice chairmanship at the 1998 delegates congress at Legon, but lost out to Prof Wayo Seini, Madam Ama Busia and Dr Kwaku Afriyie, former Minister of Health. At the last count, 12 people have indicated their interest in the NPP flagbearership.

However, among the lot, only Capt (rtd) Kwame Nkrabeah Effah-Darteh, MP for Berekum and former deputy Minister of the Interior has so far launched his campaign while others seem to be playing a hide and seek game with their ambitions.

Other presidential hopefuls are Dr Kwame Addo Kufuor, Minister of Defence and brother of President Kufuor who formally announced his presidential aspiration in Koforidua two weeks ago, Nana Addo Dankwa Akufo-Addo, MP for Abuakwa South and Minister of Foreign Affairs, Regional Integration and NEPAD, who will embark on an Upper West Regional tour in due course, Dr Kofi Konadu Apraku, MP for Offinso North and former Minister of NEPAD, Yaw Osafo Maafo, MP for Oda and former Minister of Education and Sports, as well as Vice President Aliu Mahama.

Lately, 'General' Dan Kwaku Botwe, NPP former General Secretary and immediate past Minister of Information is also rumoured to be eyeing the Osu Castle while Hawa Yakubu has not given up on her ambition to be the woman to lead the country.

Dan has parried all questions on his ambition, directing prying journalists to the rumour-mongers, as his popularity soars.

Last Saturday, he was given a standing ovation at the inauguration of the Greater Accra NPP's new secretariat when he touched on issues affecting the foot-soldiers.

Minority will reject move by gov’t to purchase new president...
21 minutes ago