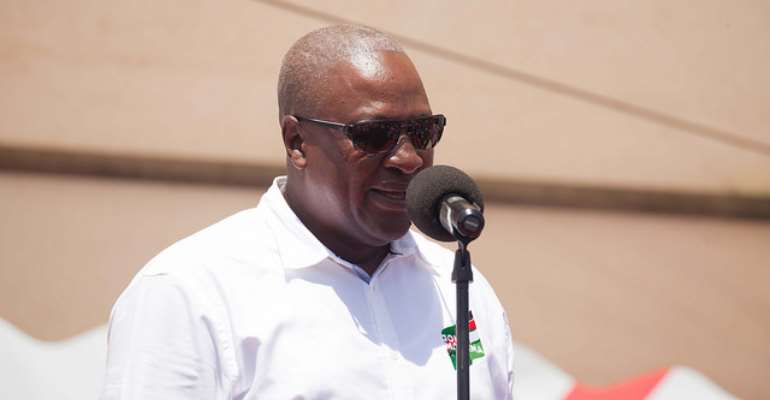 From empirical observation of the person John Dramani Mahama, his persona, and actions both in government and outside government, make him clearly unfit for re-election to become the President of Ghana again. By his attitudes, he has proved himself a total disgrace and an insult to the intelligence of well-meaning Ghanaians.

It is said, "Show me your friend and I shall tell you your character". The very rude persons, liars and potential criminals former President John Dramani Mahama adores and associates with go a long way to tell the sort of person he is. What a "like father like son" scenario we keep witnessing in the public life of John Mahama on daily basis!

If it is true that he has employed that liar called Kevin Ekow Baidoo Taylor, a self-exiled Ghanaian living in the USA, to constantly insult, attack and fabricate stories about he, Mahama's, political opponents, then he has a big question mark to his name as a contestant for the presidency. If he is in league with Kwame Asare aka Kwame A-Plus, to tarnish the reputation of His Excellency the President, Nana Addo Dankwa Akufo-Addo, and his government, by running them down in favour of he, John Mahama, then I am afraid he has goofed.

He had better zip up his trousers than to always bare his nakedness to these young and shameless loudmouth celebrities, spending the taxpayers' money on them as though, the money is coming from the toil and sweat of his labour. This man has the shameless audacity to tell Ghanaians that it is rather President Nana Akufo-Addo who is corrupt. The nation's money he uses to satisfy his sexual drive could better be put to use to benefit some collective interests of Ghanaians. What a selfish and greedy person Mr Mahama is!

I can't get my head around why the Board Members, Managers or Directors of the consolidated UT Bank contacted former President Mahama to request him to persuade his younger sibling, a criminal sauntering through the streets of Ghana as a rich man, to pay up the GHC302 million he had borrowed from the bank. Until today, his said brother, has not paid a Cedi of the loan he took, contributing to the bank going insolvent, and finally collapsing into receivership and group-consolidation. Was his same brother not craftily evading import duty payments for two years by writing dud cheques?

What is a "dud cheque", one may ask? It is defined as " a cheque (= printed form promising to pay money) that has no value because the person who has written it does not have enough money in their bank account to pay it"

In the dead of handing over the reins of government to the president-elect, Nana Akufo-Addo, after woefully losing election 2016, he illegally signed out 75% of the Nyinahin bauxite deposit worth billions of US dollars to his younger brother who has fondness for taking bank loans but refuses to pay them back. Why should an outgoing President who has just about nine days to exit the presidency, sign such a contract to cede a huge national asset to his brother for free? He did not seek parliamentary approval contrary to a requirement in that regard by the 1992 Constitution.

It is by the abrogation of that spurious contract and its reassignment by the NPP government that the country has got some foreign money to construct the ongoing roads and other infrastructural developments ongoing in Ghana. Mr Mahama single-handedly signed the contract for his brother on 30 December 2016 while he was officially to hand over power to president-elect Nana Akufo-Addo on 7 January 2017.

Additionally, look at the Airbus saga where former President Mahama signed a guarantor's form for his another brother, Samuel Adam Forster Mahama, residing in Great Britain, to enable him obtain Ghana passport only for him to involve himself in bribery that has tarnished the image of Ghana internationally. The bribe taken was only to profit Mr John Dramani Mahama and his usual corrupt family and some of his government officials.

Former President Mahama presided over a government that was hugely corrupt, conniving with individuals and companies to dupe Ghana by "Create, Loot and Share" judgment debt payments; bloating the cost of government contracts and investing in dubious public projects all with the motive of swindling the country for their selfish gains.

He has said in a video that has gone viral that as a politician, he sometimes tells his audience lies just to woo them to do what he wants from them. Does this not go to tell that all the promises he has started giving Ghanaians going into election 2020 are all lies?

Fellow Ghanaians, do not deceive yourselves so that you are not deceived by former President Mahama and his ilk of liars who love power, fame and money more than any service they can render to Ghana. Mr Mahama and his supporters like Mzbel, Tracey Boakye, Kwame A-Plus, Kevin Ekow Baidoo Taylor etc., are only out there to seek their selfish insatiable greed but not the collective interests of Ghanaians. Subsequently, I call on all rational Ghanaians not to vote to bring back that brigade of shameless thieves to rule Ghana again.

The facts already in the public domain do speak for themselves that Mr John Dramani Mahama has nothing good for Ghanaians. He is only there to pursue his parochial greedy interests, illegally amassing wealth as if he will never die or if he dies, he will be able to carry all the acquired wealth with him into the grave and into next world.

President Nana Akufo-Addo is much better a candidate for the presidency than former President John Mahama. The facts for and against each of them are in the public domain to speak for themselves.

For all that I have come to know about former President cum presidential-candidate John Dramani Mahama is he is a complete misfit in the post of the President of Ghana. He is not farsighted. He thinks more about himself. He is massively corrupt as in malfeasance and abusing his position to help his many side-chicks, supportive journalists, etc. He is a liar by his own statements. He is a womaniser who uses not the money gained from his sweat but the taxpayers', to service his numerous concubines. Such a person, in my honest estimation and conclusion, is unsuitable for election to the presidency.

Stay tuned for more updates from the fearless proud son of Kumawu/Asiampa.