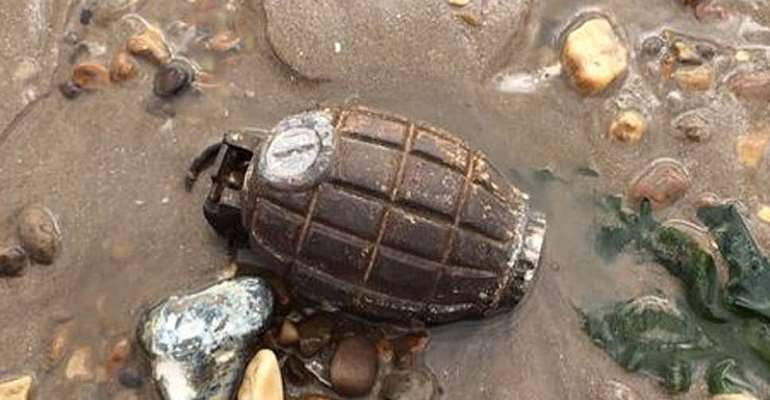 Some residents at South La in the Greater Accra Region say they feel unsafe living in the community after a grenade explosion last Tuesday.

Three siblings nearly lost their lives after the grenade exploded while in their possession at the La Beach.

The children included five, seven and 10 year-olds who had gone to the beach to play.

Later on Wednesday, August 5, 2020, the police and military visited the site to discover more grenades.

But speaking to Citi News, the residents said they feel threatened, especially as they are yet to find how the grenade found its way to the beach.

“This thing hasn’t happened before, so as it is now, everyone will panic because we do not know what will come next. So we wish the government will make the security in the area bit tight for us so we can be safe. As we are living by the sea, we walk past there, day and night and do not know what will happen again. I had a shock, how the grenade just exploded.”

“We just heard the sound of the explosion. Then later, one of my guys went there and came back reporting that it was a bomb. So automatically, we were scared. The police stepped in to calm us down. But now, we do not know if those behind it, will come and put it there again”, another worried resident said.

Meanwhile, the Greater Accra Regional Police has cautioned the general public especially parents and community leaders to be wary of strange objects they chance upon and immediately draw the attention of the police for appropriate response.

In a statement signed by the Head of Public Relations at the Greater Accra Regional Police command, parents were advised not to leave children without guidance.

The admonishment follows the explosion which caused injuries to four children who were playing along the La Beach on August 5, 2020.

All four have so far been treated and discharged.

“Parents are advised not to leave children without the needed parental guide especially, now that they are home. Similarly, children should be discouraged from handling unfamiliar objects”, the police noted.

The police service says it should be notified of strange objects found in communities through its emergency numbers 191, 18555 or 112.