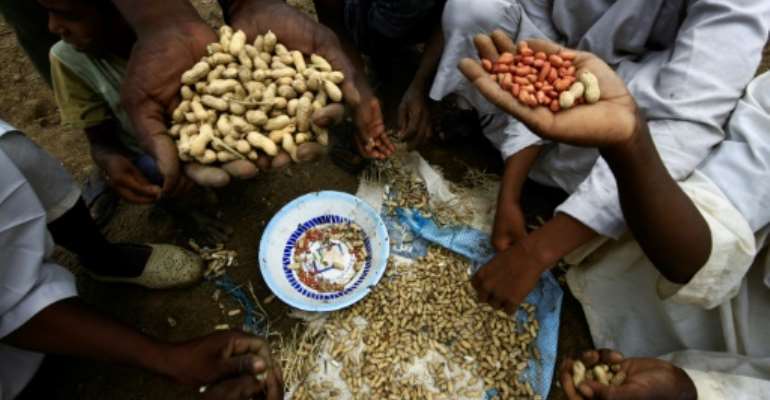 Sudanese farmers display their harvest of peanuts, a key crop hit by a government export ban. By ASHRAF SHAZLY (AFP)

Sudan has been a top producer of peanuts for so long that the nutritious variety is called the "Sudani" -- but a government export ban has left traders reeling.

Rimaz Ahmed, commercial director of Abnaa Sayed Elobeid, one of Sudan's major agricultural export companies, was stunned by the sudden decision of the trade ministry to ban the export of raw peanuts.

The government says it wants Sudan to process the nuts inside the country to earn more money.

But traders said they were not given time to prepare.

"It's a shock because we were not warned," Ahmed said, of the April 1 restrictions. "Overnight, we lost important markets. Immediately, India replaced us."

The two main customers for Sudan's peanuts were China and Indonesia.

On the wall of Ahmed's office, a poster in English praising the crops -- "Peanuts: a Culture with the Flavours of Sudan" -- seems to be from another time.

'As if France banned wine'

The export ban was a shock for many in the African nation, which, according to the UN, is the fifth largest peanut producer, with 14 percent of world production.

The decision comes at a tough time for the country.

Sudan has endured years of international isolation and sanctions, and is now emerging from decades of dictatorship.

For Sudan, peanuts are a flagship product, like another of its major exports, gum arabic.

"It is as if France banned the export of wine overnight, or if Italy stopped selling its spaghetti abroad," Ahmed said.

Income from the crop was rising.

Trade Minister Madani Abbas Madani defended halting exports "to maximise the market value of peanuts and the added value of Sudanese products, in light of climate change which affects the quality" of the product.

For the government, the hope is that Sudan can earn more money through selling products from processed peanuts -- such as oil or butter.

Peanuts can also be used in industrial products, including cosmetics.

Sudanese farmers like Khair Daoud depend on peanut crops as a key part of their income. By ASHRAF SHAZLY (AFP)

Critics of the ban on exporting unprocessed nuts have questioned why it was introduced so abruptly, suggesting that it might be a personal whim of the trade minister.

But the minister has insisted his decision was "within the framework of government policy".

He has yet to convince traders, however.

"We agree in principle it may be good for the country, but we are not at all prepared," Ahmed said.

"We have neither the machines nor the know-how. It will take time -- and in the meantime we have lost our big customers."

For Sudan, a predominantly agricultural country, the ban could have a major impact on rural employment.

'Shot itself in the foot'

Farmer Khair Daoud tends his field of peanuts, a crop well suited to growing in Sudan. By ASHRAF SHAZLY (AFP)

The news has not yet reached some farmers.

In Ardashiva, a village 70 kilometres (40 miles) south of the capital Khartoum, Khair Daoud, 31, digs around his peanut plants.

This year, he has planted over 12 acres (almost five hectares) of peanuts, saying that if prices rise as they have done in recent years, he would nearly double his production next season.

"If not, I will rely on okra, cotton or sorghum," the farmer said, dressed in traditional flowing white robes, with a neat skullcap of the same colour.

"I haven't heard anything about exporting. I don't know if my buyers are selling my produce locally, or for export."

Peanuts are well suited to Sudan's climate, growing both under irrigation in the centre and east, or from rainwater in war-torn Darfur in the west, or Kordofan in the south.

At the chamber of commerce in Khartoum, businessman Izzeldin Malik said the government's ban was self-defeating.

"With this decision, Sudan shot itself in the foot," said Malik, owner of the Rubicon peanut export company.

"While the deficit in Sudan's trade balance should be reduced, the minister made a decision to increase it."