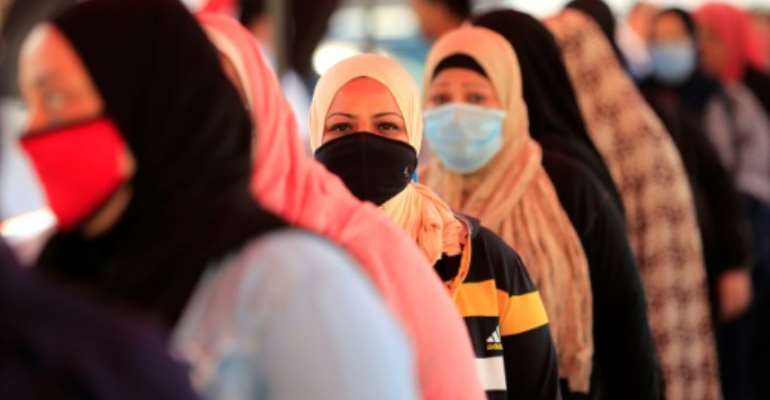 Egyptians queue up to vote for a new Senate in an upper house election. The two-day vote for 200 of the Senate's 300 seats will be largely contested by candidates who back President Abdel Fattah al-Sisi. By Khaled DESOUKI (AFP)

The two-day vote for 200 of the Senate's 300 seats will be largely contested by candidates backing Sisi, who has quietened most opposition within and outside the legislature.

The remaining 100 Senators will be appointed by Sisi, who was an army general when he took power following the 2013 ouster of elected Islamist president Mohamed Morsi on the back of mass protests against his brief rule.

"It could be useful in terms of being a way to reward those backing Sisi."

Billboards promoting little-known candidates have popped up across Cairo and other cities in recent weeks, and online videos have explained the Senate's role and urged people to cast their ballots.

The vote comes as Egypt has reinstated the upper house, which had been abolished after Morsi's ouster. It was previously called the Shura Council.

Under former president Hosni Mubarak, who was toppled in a 2011 popular uprising, the upper house was largely reserved for the elite and members of his now defunct National Democratic Party.

Last year, Egyptians overwhelmingly voted in a referendum in favour of far-reaching constitutional amendments that included the reinstatement of the upper house.

The changes also could see Sisi's rule extended until 2030, boosted his control over the judiciary and granted the army even greater influence in political life.

Billboards promoting little-known candidates have popped up across Cairo and other cities while online videos have explained the Senate's role and urged people to cast their ballots. By Khaled DESOUKI (AFP)

The vote is Egypt's first amid the coronavirus pandemic and comes as official infection rates have dropped off in recent weeks.

Results are expected on August 19. The chamber, where women are allotted at least 10 percent of seats, is to sit for a five-year term.

The Senate has few formal powers but legally "is tasked with examining and proposing what it sees as bolstering the pillars of democracy, supporting social peace and the fundamentals of the society".

"The upper chamber's opinions should be taken into consideration and have rarely been ignored in the legislative chamber's history," Egyptian lower house lawmaker Mohamed Abu Hamed told AFP.

"However, legally speaking, its opinions are non-binding," he said.

The lower house has greater powers, but critics have long also decried the "rubber-stamp" role of the parliament which features only a small opposition bloc known as 25/30.

Heavy restrictions have been imposed on protests and critical websites blocked. Rights groups say freedoms gained in the 2011 uprising against Mubarak have largely been rolled back.

Michael Hanna of the US-based The Century Foundation, commenting on what he characterised as Egypt's stagnant politics, said bringing back the upper house is "peculiar in this politics-less setting".