If Akufo-Addo Can Ask Domelevo To Go On Leave, He Can Do Same To CJ, EC And CHRAJ Bosses — Mahama 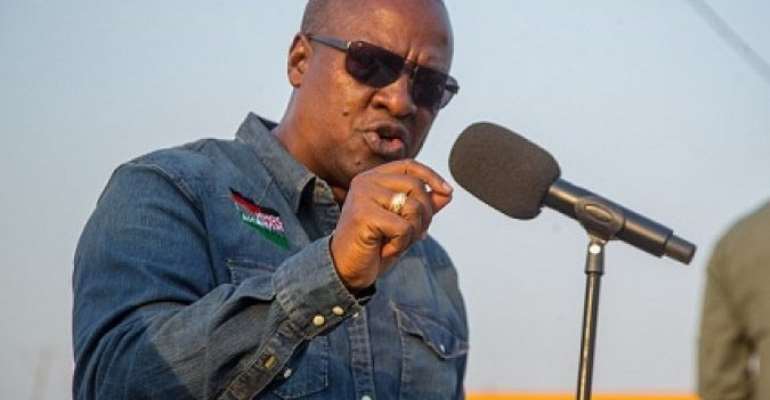 Former President John Mahama and flagbearer of the opposition NDC says the presidential directive to the Auditor General to proceed on leave sets a dangerous precedent for the country.

He noted that President Akufo-Addo’s treatment of the auditor general is a reflection of the general politicisation of key state institutions under the NPP administration.

“Look, the Auditor General, when you go on leave who changes your door locks? It means that there is no intention that you’re coming back and apart from that what is the…the Auditor General’s office is supposed to be an independent office,” he stressed.

Mr Mahama also berated government over the violence that erupted in some registration centres during the just ended vote registration exercise.

“The most ludicrous one that I have heard was the strategy they use, they meet a group of people and they say Bonjour and if you respond Bonjour, then they say you are a Togolese or a Burkinabe but who does not know Bonjour in Ghana?”

“People whose ancestors were born in this country and they have contributed to the progress of this country are the great, great-grandchildren of people who lived in this country long before independence, today you go to register and somebody says you are not a Ghanaian because your name does not sound familiar; it is not what he is used to but the EC even said that assuming you believe the person is not a Ghanaian, file the complain the form, they refused and took the law into their hands”.

“I saw a very sad video of somebody in civilian clothes holding a pistol and threatening a police officer and there were other security personnel there including the military and what I saw was them begging him to calm down and I said this guy should be arrested and be behind bars right now and yet they were begging him with his pistol threatening the police officer. I mean what kind of a country have we become?”

“All these people are running rampage and we have just seen this recent registration exercise where thugs go and try to prevent people from registering, they go and cause confusion at the polling centres in order to disrupt the process and yet they do it with impunity and they get away with it,” he bemoaned.

Applaud EC For Compilation Of New Voters’ Register Within Sh...
41 minutes ago