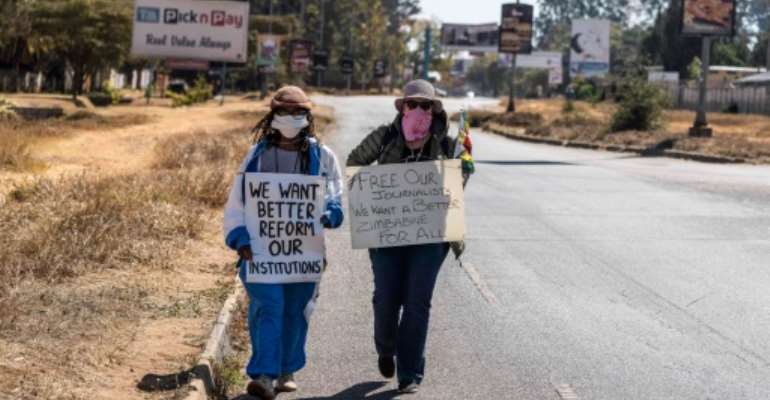 It was a week that for Zimbabwean author Tsitsi Dangarembga started with elation and ended in despair.

It began with the news that her latest novel had been long-listed for one of the world's top literary awards -- a dazzling peak in a career that, like her country, spans nearly four decades.

And it ended in despondency after she was arrested, bundled into a police cell and charged with inciting public violence after taking part in a two-women silent protest.

On the morning of July 31, the 61-year-old left home telling her husband she would be back shortly from staging a snap protest along a nearby road.

She was arrested with her friend as they stood on a street corner bearing placards demanding reform of Zimbabwe's institutions and freedom for critics.

"I was very sad because the message on my poster was very peaceful. I didn't think of it as confrontation at all, although we had been told that the demonstration was illegal," Dangarembga said after she was released.

"I'm not a human rights defender, I'm not a politician and I don't ever intend to be. The little activism I do through narrative is not confrontational, and I call myself a conscientious citizen," she said in a phone interview with AFP.

President Emmerson Mnangagwa was once a loyal lieutenant to Zimbabwe's hardline post-independence leader Robert Mugabe. He took over after the military forced out Mugabe in November 2017. By Jekesai NJIKIZANA (AFP)

The listing for the revered Booker Prize for her work "This Mournable Body" marks a new high point in a decades-long career in novels, plays and films.

"That arrest was like the other side, the letdown -- the disappointment of 40 years of being in Zimbabwe," she said.

Dangarembga started studying medicine at the University of Cambridge but did not finish as her parents moved back to Zimbabwe at independence.

She switched courses to study psychology at the University of Zimbabwe, then went to study film in Germany.

Dangarembga stepped into the international limelight in 1988 with her debut novel "Nervous Conditions", a coming-of-age story about a girl's battle to escape poverty and get an education in the then Rhodesia, before the country gained its independence from Britain in 1980.

It was the first book published in English by a black Zimbabwean woman.

It won the 1989 Commonwealth Book Prize for fiction and in 2018, it was named by the BBC as one of 100 stories that shaped the world.

It is with her latest work that Dangarembga has waded into post-independence Zimbabwe -- a picture of gathering darkness that compares tragically with the golden dawn of 40 years ago.

The sequel to "Nervous Conditions", "This Mournable Body" is her "effort engaging what I see happening," she said.

Potential material for the work is everywhere, for southern Africa's bread basket has become a symbol of want.

The economy is battling inflation and chronic shortages, from clean water to drugs and food -- to which the damage from the coronavirus pandemic must be added.

The United Nations has signalled a "rapidly expanding emergency" in which two-thirds of the population will face hunger by year's end.

"For most of us in Zimbabwe at the moment it's quite miserable. We are in very difficult, challenging and exhausting situations that leave us quite psychologically drained," said Dangarembga.

"When Zimbabweans say 'we can't breathe', they mean it. There is this deprivation of hope... a kind of psychological torture," she said.

She had hoped the situation couldn't be "that bad", but increasingly it "becomes apparent that it is really, quite devastatingly bad... It's a slow-burner kind of badness in Zimbabwe, it's so very clandestine, and not in your face."

Dangarembga's protest was made in full knowledge of the ruthless response that can meet dissent in Zimbabwe.

Her arrest, and those of dozens of others around thwarted protests on July 31, heralded an apparent toughening by the authorities.

A protest march by doctors in Harare last December over the state of Zimbabwe's health service. The situation has become calamitous with the arrival of COVID-19, say experts. By Jekesai NJIKIZANA (AFP)

President Emmerson Mnangagwa later warned "bad apples" would be flushed out while he also referred to unnamed "terrorist opposition" and "dark forces" existing in the country.

One thing that worries Dangarembga is the "militarisation of civilian areas".

"We have failed to build a civilian state. We have built something that resembles a guerrilla state because that is what is happening," she said.

The ruling "ZANU-PF (party) has become a nationalist guerrilla army".