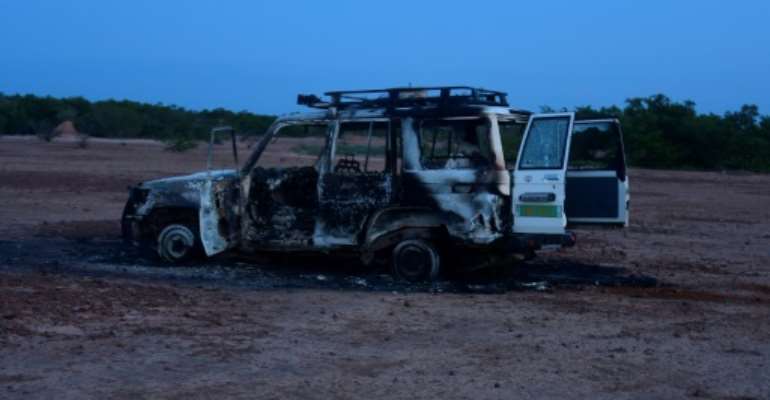 The bodies were found next to the burned-out wreckage of the group's vehicle. By BOUREIMA HAMA (AFP)

Troops in Niger backed by French air power launched a hunt Monday for the killers of eight people, six of them French nationals, as prosecutors in Paris announced a terror investigation into their deaths.

"Search operations with our partners are underway to root out the people behind these vile acts and strengthen security in the area," the Nigerien interior ministry said.

The French military, which has a 5,100-member anti-jihadist force in the Sahel, said it was providing air support for the operation, which is unfolding over a vast wooded area.

Six French citizens were killed on Sunday along with their Nigerien guide and driver about six kilometres (four miles) from the town of Koure, in a wildlife haven about an hour's drive southeast from the capital Niamey, officials said.

The country, one of the poorest in the world, is struggling with incursions by Islamists from both Nigeria to the south and Mali to the west.

In Paris, French anti-terror prosecutors said in a statement they would investigate charges of "murders with links to a terrorist enterprise" and "criminal terrorist association."

A map of Niger locating the attack on French tourists in Koure. By (AFP)

French aid group ACTED said a number of its workers were among those killed and it would hold a press conference later Monday.

It is believed to be the first such attack on Westerners in the area, which has developed as a tourist attraction over the past 20 years thanks to its unique population of West African giraffes.

The attackers came on motorcycles through the bush and waited for the group's arrival, a source said.

Most of the victims were shot although one woman managed to escape but was later caught and her throat was cut, a source said.

The bodies were laid side-by-side next to a torched 4x4, which had bullet holes in its rear window.

Nigerien forensic experts investigated the site of the killing before the bodies were taken to Niamey.

French President Emmanuel Macron and his Nigerien and Malian counterparts Mahamadou Issoufou and Ibrahim Boubacar Keita lashed the attack as cowardly and barbaric.

The Koure area is a sanctuary for hundreds of West African giraffes, a subspecies distinguished by its lighter colour.

West African or Niger giraffes, the last of which are in southwestern Koure, near where the attack on French tourists took place. By BOUREIMA HAMA (AFP/File)

"We all go to Koure on weekend outings because it's very easy to access," a Western humanitarian source based in Niamey told AFP.

"Everyone goes there, even ambassadors, diplomats, teachers... it is not considered a dangerous zone at all."

To the northwest of Niamey, the Tillaberi region has become a hideout for Sahel jihadist groups such as the Islamic State in the Greater Sahara (ISGS), which have killed hundreds of troops and driven thousands from their homes.

Two young Frenchmen, Antoine De Leocour and Vincent Delory, were killed after being kidnapped by jihadists from a restaurant in Niamey in 2011.