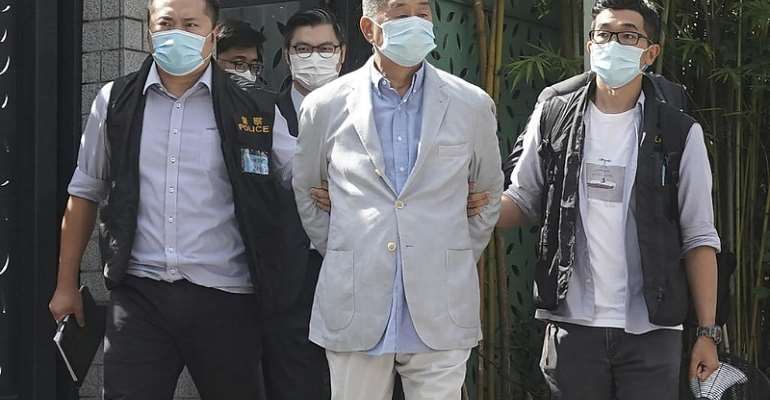 Hong Kong's new National Security Law was used to snare its biggest target to date on Monday morning, as media mogul Jimmy Lai was arrested along with eight others on suspicion of collusion with foreign powers. The offence carries a maximum sentence of life in prison under the law.

Lai, 71, is a rare tycoon in Hong Kong to speak out against Beijing, and owns the avowedly pro-democracy Apple Daily newspaper. The paper's newsroom was later raided by about 200 police, as was a restaurant owned by one of his two sons, who were both also arrested.

The businessman, who came to Hong Kong from mainland China as a stowaway at the age of 12, has had numerous links with high-ranking officials in the United States in recent years. Last year, he met both Vice-President Mike Pence and Secretary of State Mike Pompeo in Washington and in May called on Donald Trump to “save Hong Kong”. However, given the National Security Law is not retroactive, it is unclear if Lai has violated it since it came into force on 30 June.

It is the third time Lai has been charged this year – on the previous two occasions for illegal assembly and incitement to illegal assembly during last year's protests and at this year's outlawed Tiananmen vigil on 4 June. He has in the past been the target of violent attacks for his pro-democracy stance, most recently last September when suspected Triads threw petrol bombs at his home.

But it was the targeting of Apple Daily's newsroom, a couple of hours after Lai's arrest, that aroused the most outrage in Hong Kong. Police officers descended en masse on the offices in the suburb of Tseung Kwan O, despite social distancing measures due to Covid-19 currently restricting public gatherings to two people. Apple Daily broadcast the raid live on its Facebook page.

The Democratic Party, of which Lai is a major donor, denounced the arrests of “members of the press” – also detained were executives of Next Media, the newspaper's owners – and said the raid on the offices was intended to create a “deterrent effect” for pro-democracy media.

Former student leader Joshua Wong said the raid spelled “the death of press freedom in Hong Kong”. Several media groups were also refused entry to a police press conference after the raid; one of them, the public broadcaster Radio Television Hong Kong, reported its journalists were told the police were not admitting “media that had previously obstructed them”.