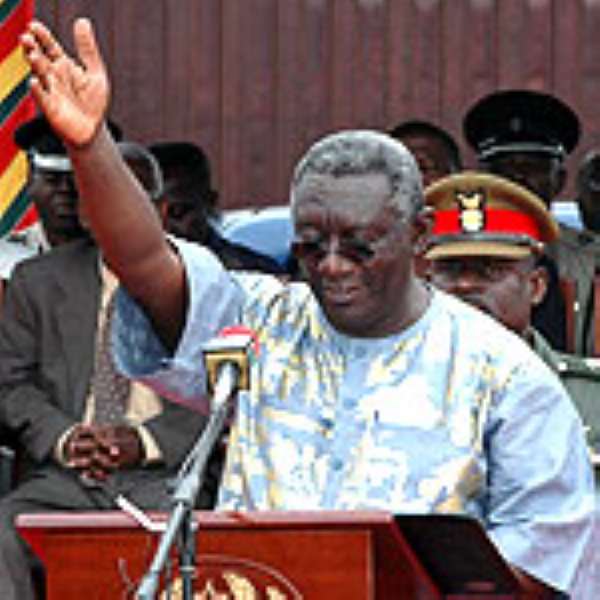 Ghana through its Millennium Challenge Account (MCA) programme is to generate over two million jobs within the next couple of years, President John Agyekum Kufuor announced today in Accra when he launched the national programme at Abeka Lapaz, Accra. He said, that fitted perfectly into the Government's vision of creating wealth to reduce poverty.

President Kufuor gave the assurance that the Government would retain an oversight role to ensure that the resources coming in were transparently and efficiently deployed to the benefit of farmers and the entire economy.

Ghana's MCA Compact was signed on August 1, thus paving way for the country to be eligible to access US development support of 547 million dollars. This amount represents more than a quarter of the 2.1 billion dollars the US Government has made available for sharing among the total of nine countries selected for the MCA fund. The Account is the US Government's reward to countries that rule justly, invest in their people and fight poverty.

Pressident Kufuor outlined some of the activities that would be undertaken with the funds, saying, it would be used among other things to assist farmers with high-yielding planting materials, credit, machinery, irrigation facilities and training in modern farm practices to increase their productivity,

Besides, businesses would be supported to invest in storage and marketing, transportation, value addition and agro-industrialisation. Part of it would also go into the construction of a 14-kilometre six-lane dual carriageway from Mallam Junction to join the Tema Motorway for quicker transportation of exports especially farm produce to the ports.

President Kufuor said a network of feeder roads and trunk roads would also be improved all over the 23 Compact Districts to link farm gates to the markets and ports, adding that in the Afram Plains for example, apart from the roads, a new ferry would be introduced to link Adawso with Ekye-Amanfrom over the Volta River.

"All of us must, therefore, support these projects fully. The beneficiary farmers, contractors, traders, workers and community leaders must show exemplary commitment to the success of the projects. “They must show that they are the lucky ones that the entire nation has selected to lead the transformation that will lift the national population from poverty to the life of dignity and prosperity."

President Kufuor called on all the people irrespective of region, district, political party, ethnic group or religion, wherever they were, to be proud of themselves as Ghanaians. "Today, the entire nation has cause to be proud that our collective, ongoing commitment to national reconstruction and good governance has received global endorsement."

He said the country should also appreciate the friendly and humanitarian gesture that the US Government led by President George W. Bush was showing to Ghana through these projects.

Dr Paa Kwesi Nduom, Minister for Public Sector Reform and Chairman of the Board of Directors of the Millennium Development Authority, pledged that they would work as patriots to implement the MCA Ghana Programme in a transparent, diligent and timely manner so that the country would get the intended benefits. "Our aim is to invest most of the money in less than five years and do it so well to be able to go back to the Millennium Challenge Corporation for more money."

He announced that they had already started with the implementation of the programme, saying, 12 out of 15 pineapple nucleus farmers contacted last week, have signed up to participate in a demonstration programme that would involve between 400 and 500 out-growers or small-scale farmers.

Dr Nduom said by the end of December, 2006, at least five large-scale nucleus farmers would be assisted to get cooling facilities on their farms.