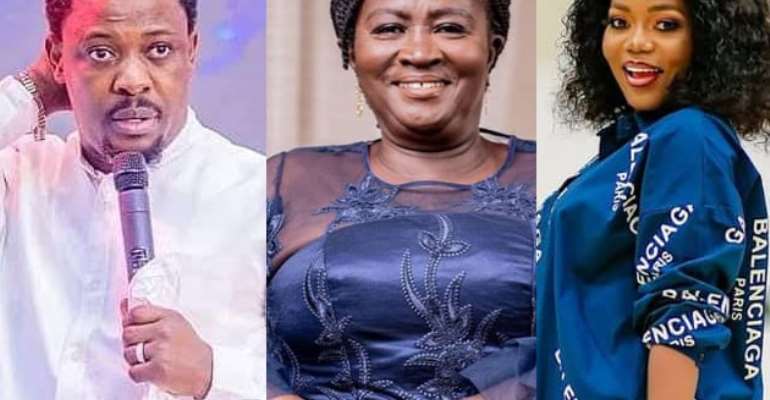 Mzbel has asked why the running mate of the National Democratic Congress (NDC), Prof. Naana Jane Opoku-Agyeman, and others keep defending Prophet Nigel Gaisie, even though they know “he is not a good man.”

“Why are you still defending this boy knowing that he is not a good person? Why?” she asked whilst in tears during a Facebook video.

Nigel Gaisie, who has predicted John Mahama's win in the upcoming 2020 elections, has this year been swimming in a plethora of damning allegations over his relationship with women in particular.

The latest one is his involvement in a fight between Mzbel and actress Tracey Boakye.

The Kumawood actress had alleged that Mzbel went to Nigel Gaisie's office in a nightie and made a U-turn to accuse the man of rape and blackmailed him to the tune of GH¢50,000.

Mzbel, in a viral video on Friday, admitted to going to see Nigel Gaisie in his office in a nightie because she was only responding to an emergency call from the man of God at 12 midnight.

She suspected Nigel told Tracey about her nightie story because he had dated Tracey before, and so wanted to use the current feud between her and Tracey as a form of damage control.

She, therefore, him warned him to “stop telling people that I am blackmailing”, else she would be forced to reveal the true story behind their brouhaha.

“If you don't stop telling people I am blackmailing you, I will come out and tell Ghanaians the true story…This is your last time if I hear that you said I have come to blackmail you, I will come and explain things deeper… you went on your knees to beg me, you said you were a young man and sometimes get carried away, I understood because no one is perfect and I have moved on. Move on too. Mind your church and stop trying to do damage control to make me look bad because I did not do anything bad to you,” she indicated.

Narrating some of the things that transpired in Nigel’s office, Mzbel revealed that Nigel made them take selfies whilst he was in a T-shirt and a pair of boxer shorts and she in her nightie.

She alleged that he tried putting his hands in her nightie during their encounter.

She reemphasized that she would come out with the full story if Nigel goes ahead to talk about her.

Earlier last week, the '16 Years' crooner said she has simply chosen to ignore Nigel Gaisie because of the respect she has for elders like Prof. Naana Jane Opoku Agyeman, who even called to speak to her.

This got many people wondering as to what Prof. Naane Jane’s interest is in this 'Mzbel and Nigel's office' brouhaha.

“I am disappointed in the people who believed in you. The compensation, was it you who paid? Do you have money? Were you able to compensate me? I have seen the picture you have been sending. If you are sending pictures, send all with the one you put your head on my chest and wanted to push your hands into robe (nightie),” Mzbel disclosed.

“Those of you who spoke for this guy Nigel, you said so many things that this guy has done that you defended him. Why are you still defending this boy knowing that he is not a good person? Why?” she queried.