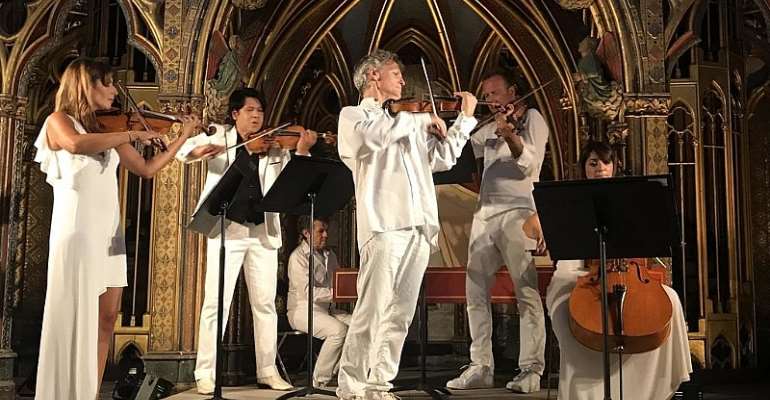 The medieval Saint Chapelle chapel in Paris, which formerly housed Christ's relics, is a secret acoustical haven for musicians. As all major concert halls, festivals and music events have been cancelled this summer, music-lovers in Paris can attend a simple and laid-back rendering of Vivaldi's Four Seasons at the Saint Chapelle, with sound amplified architecturally by the chapel's unique nave.

For 25 years, Paul Rouger and his ever-evolving quintet have been playing well-known classical pieces to simple and unpretentious audiences at Paris' Sainte Chapelle.

But ever since the coronavirus epidemic, life has not been the same.

"For five months, not only did we not play music, but we never heard any music being played live." Rouger told RFI. "It was all virtual."

"It's great to be back in front of an audience" he said, beaming. "Musicians and artists need people to play to."

Sacred, mystical with unique sound effects
Rouger says that the Saint Chapelle church has acoustics that are unique in the world.

"The high stained-glass windows create excessive acoustic reverberation when the chapel is empty. However, when it's full of people, the reverberation is compensated and the sound is perfect", he said.

Rouger also emphasised on the mystical and sacred nature of the chapel.

"The relics of Christ were housed here. There is something magic, something mystical going on."

RFI had permission to record the concert, which was played without amplification, just like in ancient times.

Listen to RFI's podcast featuring excerpts of Vivaldi's Four seasons, amplified by the architecture of the Sainte Chapelle.

(Recorded with the permission of Paul Rouger and Euromusic Productions)

This is what Akufo-Addo and US Vice President Kamala Harris ...
15 minutes ago