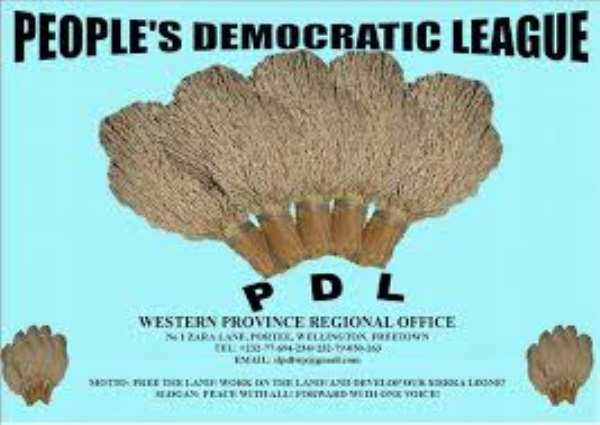 We are in an unprecedented moment and it is for such a time before and as today, that the People’s Democratic League (PDL) was formed in 1986 to be in the forefront of the struggle for the return of Sierra Leone to democracy and democratic good governance.

Our leaders have made unprecedented progress in recent years to consolidate peace. But more efforts are needed and that should not be left in the hands of failed politicians, who have impoverished the masses and now want to plunge our country into a tribal war.

No sane-thinking person will deny the fact that Sierra Leone is heading for abysmal collapse if common sense is not allowed to dictate. Rude tribalism or exclusion in any form is incompatible with God’s call to unity and patriotism. Sierra Leoneans need to turn to God Almighty, to pray for national healing.

In light of this, the People’s Democratic League (PDL) invited all its members, supporters and sympathizers, and other Africans on the continent and the diaspora to observe Thursday, 6th August, 2020 as day of fasting and prayer for the party, as its struggle for its final registration certificate. This call was yielded amass and most importantly, the Party was also joined in the exercise, by our African brothers and sisters in Uganda, South Africa, Malawi, Madagascar, Nigeria, Ghana, Togo, Ivory Coast, Mali, Guinea, Liberia and in the USA. Those who did not join we know it was because of lapses in the communication. We hope this will change soon.

The 1991 multiparty constitution gives all Sierra Leoneans the right to form and belong to political parties of theirs, without interference by anyone. It is unfortunate that PDL constitutional rights and democratic freedoms were being subjected to the evil designs and tastes of greedy, avaricious and good for nothing politicians who have sold the dignity of Sierra Leone for a life of opulence and immorality. The truth of the matter is that, the injustice meted on PDL registration for political party is brutal, and not even near to the pains and suffering under Ebola and Cocid-19 combined.

The Holy Bible teaches us that God made man in His own likeness. We take oath to serve a nation and not to destroy it; and having witnessed the senseless killings of our fellow Sierra Leoneans and the pain and suffering inflicted on their families and our society, it reminds one of St. Paul’s letter to the Corinthians where he shares that we are all one humanity, and when one suffers, we all suffer. (1 Cor. 12:12-27).

As we prayed and fasted for divine intercession and protection and for spiritual wisdom, we want to assure all Sierra Leoneans and Africans in particular that, our faith in God Almighty will give us calm in the midst of the storm. Our prayers and fasting will at the end help to guide us in our struggle for human rights, democracy and democratic good governance.

God is greater than any force on earth, and we, in the People’s Democratic League (PDL) believe that demonic forces can only be driven out by prayer and fasting. The two go hand in hand. Prayer keeps us rooted in the fact that it is our desire to carry out God's will. Fasting is a sacrifice that helps us reach beyond our own limitations with God's help.

The People’s Democratic League (PDL) encourages its members, supporters and sympathizers, both in and outside Sierra Leone to continue to double down on our prayers, fasting, and sacrifices. We know that God Almighty is watching over the PDL. We firmly believe that we will endure this trial and will not lose hope.

We are living in extraordinary times and when our constitutional human rights and democratic freedoms as provided in the Sierra Leonean 1991 constitution unjustly trampled upon by the enemies of our people, PDL remains steadfast in its faith and trust in God Almighty. Our prayers and sacrifices and our yearning for peace, freedom, justice and happiness of Sierra Leoneans will be heard into the highest heaven.

Every Sierra Leonean citizen, not only PDL has a duty to pray for the country, its people and its leaders. Since the PDL has been unrelenting in praying and fasting for Sierra Leone, we appreciate and want to thank all PDL members, supporters and sympathizers who are yielding to the call for prayer and fasting for the well-being of all Sierra Leoneans, and welfare of the nation. Sierra Leoneans need to pray every day, not only once. We cannot pray only when there is a crisis. Prayer is an everyday activity so that God can see our genuine faith and bless us in all our endeavours.

Where there is no vision, the people perish, so says the wise adage. It is a known fact that Sierra Leone has been a highly religious nation across faith lines and denominations. However, our leaders have all fallen prey for immorality as a people, rarely practicing what we preach and have lost the path to God Almighty. It is therefore time for Sierra Leoneans, our leaders and common people to turn away from all our misdeeds and truly seek God’s face, if Sierra Leone is to move forward.

No nation can move forward without seeking the face of God Almighty. The People’s Democratic League (PDL) holds the belief that the evils militating against peace, political stability and development in Sierra Leone can be defeated if we sincerely seek the help of God while assiduously working to address same. It is on this note that the PDL has been embarking on fervent prayers and fasting to seek God’s guidance and protection against enemies of progress.