Pardon me, Sirs, Mahama couldn’t have been Ghana’s economic Messiah, could he? 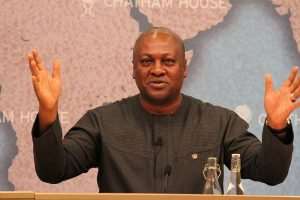 Some of us, so to speak, were extremely dumbfounded listening to the Minority Caucus’s 2020 electioneering campaign on Asempa FM on Thursday 6th August 2020, in which the NDC faithful gleefully sought to portray their flagbearer, Mahama, as the best custodian of Ghana’s economy (emphasis mine).

But contrary to NDC operatives assertion, the Economist Intelligence Unit (EIU) has concluded in its 2019 country report that former President John Dramani Mahama will find it extremely difficult to convince discerning Ghanaians into accepting that he is the preferable manager of Ghana’s economy, given his abysmal performance and the country’s fairly strong economic growth under President Akufo-Addo (see: ‘2020 election is yours to lose-EIU predicts NPP victory’; myjoyonline.com/ghanaweb.com, 15/09/2019).

There is no gainsaying in stressing forcefully that following former President Mahama’s election as NDC’s 2020 flagbearer, the crucial questions the vast majority of Ghanaians have been asking somewhat poignantly are: can the NDC’s “Messiah” redeem us from the supposedly bad governance?” And, can the NDC’s “Messiah” take us to the promise land?

Dearest reader, if you may remember, subsequent to former President Mahama’s ponderous announcement of his intention to join the NDC’s 2020 flagbearership race, several prominent NDC members and well-wishers came out and expressed grave concerns over the ex-president’s somewhat weird decision.

In fact, prominent people like Nunoo Mensah, Kojo Yankah, Ambassador Osei, amongst others suggested to Mahama to rescind his somewhat idiosyncratic decision.

What is more, the likes of Mr Bagbin, the MP for Nadoli Kaleo and the Mahama’s competitor for the 2019 NDC’s flagbearership race attributed the humiliating defeat of Mahama and the National Democratic Congress (NDC) in the 2016 general elections to bad governance (See: ‘Mahama's boys bought V8, built mansions in 4 years – Bagbin; myjoyonline.com/ghanaweb.com, 19/08/2018).

Back then, Mr Bagbin was reported to have quizzed passionately: “Don’t tell me that the boys that suddenly came closer to the president within four years can build mansions and buy land cruisers and you say there are no resources, where are they getting the money, their salaries?”

The NDC stalwarts concerns stemmed from the fact that Ghanaians rejected former President Mahama massively in the 2016 election and therefore it will be politically suicidal for anyone to clamour for his return.

More so, the founder of NDC, former President Rawlings never agreed with the teeming supporters who were blindly clamouring for the return of the ‘losing horses’.

Take, for instance, prior to the 2016 electioneering campaign, we witnessed how the conspicuously unhappy former President Rawlings kept grumbling, shrieking and raising concerns about the rampant sleazes and corruption in the erstwhile NDC administration led by former President Mahama.

Ex-President Rawlings thus lamented: “The principles of June 4 are not alien or has never been alien to mankind. They are no different from the most basic religious or human values. Probity, accountability and social justice would on any day liberate the overwhelming majority of our people from the bondage or difficulties they find themselves in.

“I want to remind people that we could not have possibly forgotten that Generals were executed. The greed, corruption and injustice of today is a thousand times more than what these Generals were executed for, and if we are unable to restore a firm measure of integrity into our dealings, then the blood of many would have been shed in vain.

“Not too long ago I thought we heard the jockeys claiming the horses were responsible for this disgraceful failure while one of the horses was bold enough to lay the failure at the doorstep of the jockeys.

“For me, we lost our masses because we betrayed the values of June 4. However if this horse – jockey business cannot be resolved comprehensively, allowing integrity to prevail, then let both of them step aside and allow for fresh leaders with solid integrity to provide the needed leadership” (Rawlings 2017; myjoyonline.com).

The all-important question we should be asking then is: who are the fresh leaders with solid integrity in NDC then?

Despite the critics irrevocable incertitude over Mahama’s suitability to lead the country again, the NDC Delegates strangely gave Mahama the nod of affirmation to lead the party to the 2020 general elections.

But to the reflective critics, it is somewhat baffling to see former President Mahama and his apologists moving heaven and earth to return to the presidency almost four years after being voted out of power by discerning Ghanaians for his dreadful errors in judgement which brought about massive economic collapse.

In truth, the other contestants of the NDC’s 2019 flagbearership race emitted vehemently that former President Mahama was the main reason NDC lost the 2016 election.

Unsurprisingly, however, a multitude of supporters within the NDC were in solidarity with the concerned presidential aspirants. The concerned supporters dreaded the talk of former President Mahama returning as the NDC’s 2020 flagbearer.

Therefore, it came as no surprise at all when a group of organisers within the opposition NDC urged the National Executives of the party to allow Mr Alban Kingsford Sumana Bagbin to go unopposed in the 2019 flagbearership contest (See: Alban Bagbin must go unopposed – NDC organisers; ghananewsagency.org/ghanaweb.com, 12/03/2018).

Back then, the spokesperson for the group, insisted somewhat vehemently that since corruption would be a key campaign theme in 2020, and the fact that former President Mahama administration had issues with corruption, Ghanaian voters would be forced to reject him if he (Mahama) was to be elected as the next flagbearer.

Suffice it to state that even though the loyalists of the other presidential aspirants held the preponderance of the argument about former President Mahama’s unsuitability for the 2020 flagbearership position, the diehard supporters somehow succeeded in their quest to have him as their presidential candidate.

It would, therefore, appear that the vast majority of the NDC loyalists have been living in a denial about former President Mahama’s unpopularity and hence choosing him over the other presidential aspirants.

It is also quite ironic that despite Mahama’s unpardonable coarse governance which brought about his humiliating defeat in the 2016 election, the Mahama loyalists are holding an elusive hope that they can present him and recapture power from NPP in 2020.

Whatever the case, I, for one, do not envision former President Mahama’s imminent return to the presidency, judging from the dreadful errors in decision-making which brought about the huge economic collapse.

Let us face it, though, the unbridled corruption, the arrogance of power and the irreversible incompetence which culminated in economic collapse are still fresh in the memories of discerning Ghanaians.

Unfortunately, however, the brassbound Mahama loyalists do not want to acknowledge the fact that Ghana’s economy was in such a terrible state because a large portion of the country’s scarce resources went down the drain from the mismanagement and the wanton sleazes and corruption perpetrated by the officials of the erstwhile Mahama administration.

There is no gainsaying the fact that discerning Ghanaians cannot so soon forget the harsh economic conditions the Mahama government wilfully imposed on them. Indeed, those sad memories will long be stencilled on the mental sheets of discerning Ghanaians.

The all-important question one may ask the brassbound Mahama supporters is: where is the justification about former President Mahama’s ability to steer Ghana to the right direction when a GH9.5 billion debt former President Kufuor left in 2009 rocketed to an incredible GH122.4 billion in just eight years?

How can the diehard supporters convince some of us about former President Mahama’s capability to lead Ghana again when he woefully shrunk Ghana’s GDP from $47 billion to $40 billion in five years?

How could Mahama supporters justify former President Mahama’s suitability to lead the nation again when he abysmally dragged an economic growth of around 14 % in 2011 to a squeamish 3.4 % as of December 2016?

By and large, the successive NDC governments have proven to be worst economic managers who can never improve upon the socio-economic standards of living of Ghanaians.

Whichever way you may choose to place the issue under discussion, Mahama has never been Ghana’s economic Messiah, and some of us, as a matter of principle, do not see him as the best custodian of Ghana’s economy.

The author has 946 publications published on Modern Ghana.