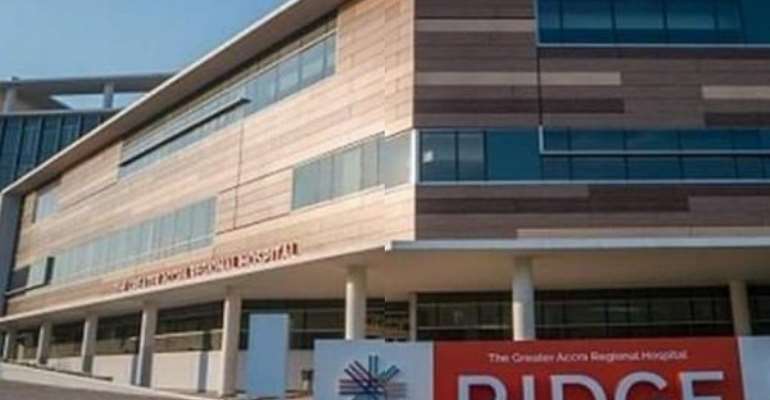 The Greater Accra Regional Hospital also known as Ridge Hospital has suspended two of its staff for engaging in administrative malpractices.

They are Mr Thomas Osei, Counter Medicine Assistant and Mr Divine Kumordzi of the Sewing Unit of the Hospital.

A statement issued in Accra by the Hospital and copied to the Ghana News Agency said Mr Osei would serve a two-week suspension without salary for inappropriate and unauthorised sale of Personal Protective Equipment (PPE) on the Hospital premises.

Mr Divine Kumordzi, on the other hand, would refund all monies realised regarding unauthorised and inappropriate sale of face masks on the Hospital premises.

He is also to serve a two-week suspension without salary.

The statement said the officers were allegedly caught by a BBC investigative team “Africa Eye” selling PPE belonging to a private individual within the Hospital's premises.

It said though the items did not belong to the Hospital and did not also constitute its COVID-19 stock, either donated or procured, their action constituted a breach of the Ghana Health Service Code of Conduct.

"As a Hospital we do not encourage this behaviours since it may adversely affect their output and also be misconstrued by the public as items of the facility,” the statement said.

It said Management stopped the practice immediately it came to its attention and ordered an auditing of the stock of PPE before arriving at the conclusion.

The statement said the sanction was in line with the provisions of the Ghana Health Service Code of Conduct and Disciplinary Procedures.

It assured stakeholders that all donations and items procured, which were routed through the Hospital's Main Stores managed by a Senior Supply Manager and the Head of Stores, and supervised by Head of Administration, were all intact.

"Management will like to use this medium to send strong warning to staff who will violate rules and regulations governing the Hospital,” it said.

"Let's all abide by the rules of engagement for the benefit of the patient and the country as a whole."