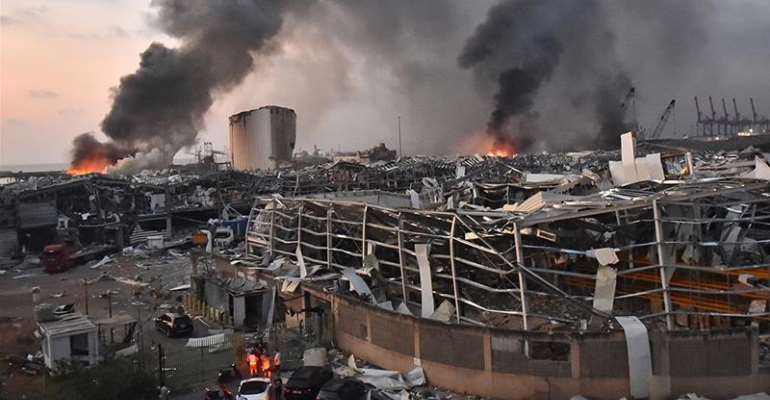 The world should be thankful to the blessed Emir of Qatar, His Highness Sheikh Tamim Bin Hamad Al-Thani, the government and people of Qatar for pointing the torchlight of the noblest path in international cooperation to save lives in Lebanon.

They do this while other Arab governments are busy bombing and killing civilians in Yemen, and at the same time trying to deny the Qatari people, through illegal, unjust and criminal blockade and malicious propaganda campaign, access to life-saving medicines, food and equipment.

The issue of the unjust, illegal and criminal blockade against Qatar, initiated by Saudi Arabia, Bahrain, United Arab Emirates and Egypt, with the tacit backing of powerful countries outside the Middle-east can be seen here as an attempt to punish humanity.

It is impossible to calculate in a small fashion Qatar’s humanitarian solidarity with poor countries and people in need, since the inception of the leadership of the blessed Emir, His Highness Sheikh Tamim Bin Hamad Al-Thani, in 2013. Without any iota of doubt, Qatar’s current humanitarian aid to Lebanon, to save lives after the devastating explosion of 4th August, 2020 explains in simple term the best of an Arab nation taking the lead in solidarity with humankind.

The Qatar Red Cross is performing a superb job on the ground in Beirut and they are the first to respond to the humanitarian need of victim in Tuesday’s explosion in Beirut, Lebanon. This has sent shivering waves to the blockading countries, which are bent on bombing and reining terror on the civilian population in Yemen.

Qatar is not in Lebanon to bomb or kill civilians and cause destruction on public infrastructure. On the contrary, Qatar is in Lebanon with a first class 500-bed mobile hospital, rescue team, medics, food and other essential humanitarian goods to save lives. This is because to Qatar, Lebanese lives matter!

It is now the fourth day since the catastrophic explosion that struck the Lebanese capital and it is clear that the death toll will climb the ladder. The scale of the devastation is unimaginable, with most of Beirut almost completely in tatters.

Few countries in the world were less equipped to deal with a disaster of this magnitude than Lebanon. For the hundreds of thousands of people left homeless and those desperate for medical attention and life-saving aid, help cannot come quickly enough. Thanks to the quick intervention of Qatar, the death rate will have been more than double in the Beirut explosion.

Qatar is not on a competition rating in Lebanon. This has to be understood in its moral meaning that Qatar thought it as a duty and responsibility to humanity, and particularly to the people of Lebanon that the disaster in Beirut is not a Lebanese issue alone, but the world over. Qatar’s humanitarian aid should not be misrepresented as a rivalry mission, or show off to the world. Qatar is committed to providing humanitarian aid anywhere, be it in mud sliding community in Sierra Leone, flooding in Southern Africa region, hunger and famine in the horn of Africa, Palestinian and refugees’ camps, or the starving Yemeni civilian population, Rohingya refugee crisis, or any other country or region that is in dire need of humanitarian aid.

For the coming days the focus in Lebanon will shift from the search and rescue phase to trying to address the dire needs of those left homeless by the massive explosion in Beirut. Hundreds of thousands have lost their houses and many others whose homes are still standing are too afraid to return for fear of the aftershocks. Medical treatment for the injured is vital. Facilities are improving as Qatar’s field hospitals arrive, and with them rescue workers, more doctors and medical supplies, but the needs are still overwhelming.

By this statement, the Sheikh Tamim Bin Hamad Foundation (STBHF) pays tribute to the quick response of the blessed Emir of Qatar, His Highness Sheikh Tamim Bin Hamad Al-Thani, the government and people of Qatar, to the disaster in Lebanon. Qatar has demonstrated an extraordinary level of generosity in extending humanitarian solidarity to victims of the Beirut explosion. This level of generosity towards and solidarity with the people of Lebanon is something of which the world cannot afford to recognize and be proud of.

We commend the government of Lebanon and, each and every member of the Lebanese public that is working hard to save the lives of survivors of the Beirut explosion. We, in particular, commend the Qatari people-Qatari Red Cross-whose priceless humanitarian support means the difference between life and death for many of those suffering the effects of the Beirut disaster.

Concluding this statement, the Sheikh Tamim Bin Hamad Foundation (STBHF) pays particular tribute to the Qatari rescue team and Qatari Red Cross workers and the Lebanese people, many of who are working in Beirut to distribute aid, provide medical attention and, wherever possible, to save lives. The Qatari contingents are on the clock, risking their personal safety to bring relief to save lives in Lebanon, and not bombing the Lebanese people, as we currently experiencing in Yemen, where Saudi Arabia and its blockading partners are bombing Yemeni civilians and destroying property with no end in sight. All of other aid workers in the field as part of private initiatives deserve also our recognition and thanks.

The Sheikh Tamim Bin Hamad Foundation (STBHF) wants to assure the government and people of Lebanon, as well as the United Nations, European Union, the League of Arab States, Organisation of the Islamic Cooperation and Association of South East Asian Nations of its preparedness, willingness and ability to join the humanitarian service in Beirut.