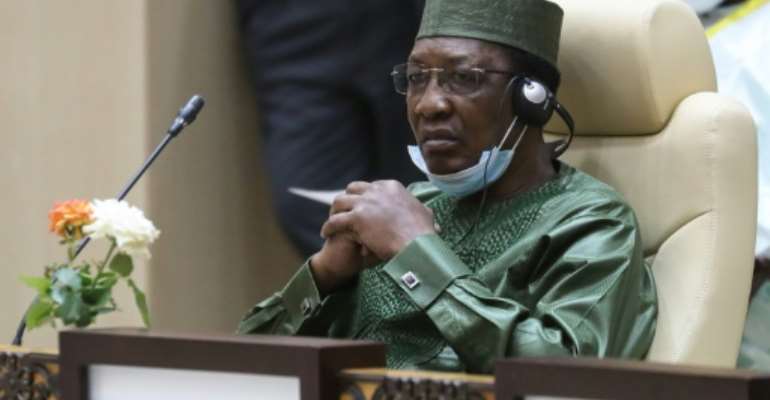 Chad President Idriss Deby (pictured June 2020) said his country will "have this Boko Haram phenomenon for a long time yet". By Ludovic MARIN (POOL/AFP/File)

Chad's President Idriss Deby said Saturday that Boko Haram jihadists would continue to wreak havoc in the Lake Chad region despite a huge military offensive against the group earlier this year.

Lake Chad -- a marshy region dotted with islands near the border of Niger, Nigeria and Cameroon -- has been battered by attacks from jihadists crossing from Nigeria.

"We will have this Boko Haram phenomenon for a long time yet," Deby told Radio France Internationale in an interview.

"The incursions will continue," he said, adding that the group "will continue to cause great damage," in the Lake Chad area.

The marshy Lake Chad region has been battered by attacks from jihadists crossing from Nigeria, and the violence has spread to Niger, Chad and Cameroon. By Jean-Michel CORNU (AFP/File)

Boko Haram's insurgency, launched in northeast Nigeria in 2009, has killed more than 36,000 people and displaced more than two million from their homes.

The violence has since spread to Niger, Chad and Cameroon.

In March, Chad's armed forces suffered their biggest single-day loss, when 98 soldiers were massacred in their base at Bohoma, on the banks of Lake Chad.

In response, Deby launched an offensive from March 31 to April 3, declaring at its end that there was "not a single jihadist left" in the Lake Chad region.

But sporadic violence has continued, with an attack attributed to Boko Haram on an army vehicle earlier last month killing eight Chadian soldiers.

Deby on Saturday insisted that there were no Boko Haram fighters left on Chadian territory but that cross-border raids from Nigeria and Niger were continuing at night.