Clashes and chaos in Beirut as PM promises early elections 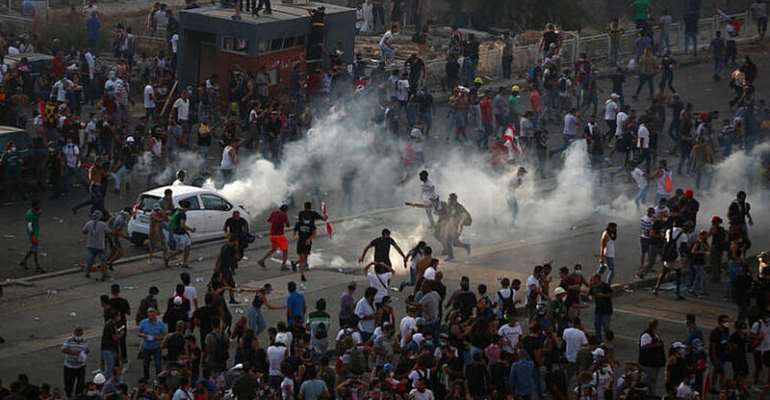 Tensions in Beirut flared significantly on Saturday, as more than 110 were wounded in protests following the tragic blast earlier this week. Angry anti-government protesters clashed with police on Saturday as a group of demonstrators took over Lebanon's Ministry of Foreign Affairs, declaring it a seat of a new 'Revolution'. Prime Minister Hassan Diab said he will call for early elections.

A group of 200 protesters led by retired Lebanese army officers stormed the foreign ministry Saturday, declaring it the headquarters of a 'revolution'.

More than 110 were reported wounded in the clashes where shots were heard.

The takeover was aired live on Lebanese television
It occurred as security forces were occupied with a nearby demonstration against the ruling elite.

A group of protesters also entered the Ministry of Economy and seized piles of documents which they scattered on the street, while another group attempted a similar move against the headquarters of the Association of Banks in Lebanon.

The explosion is widely blamed on the incompetence and corruption of the ruling elite. At least 150 people were killed, with 6,000 and hundreds of thousands homeless.

The large demonstrations were reminiscent of the unprecedented nationwide and cross-sectarian protest movement in October.

Lebanese Prime Minister Hassan Diab said on Saturday he would propose early elections to break the impasse that is plunging the country deeper into political and economic crisis every day.

Takoradi 'azaaa' woman still in custody as she fails to meet...
14 minutes ago