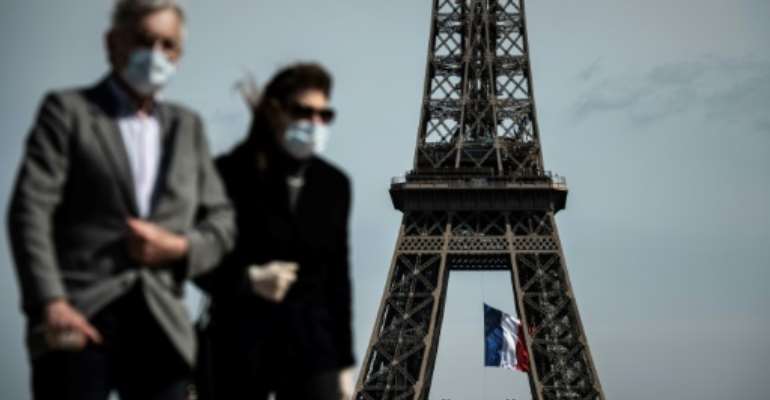 Health officials have recorded rising rates of infection in and around Paris. By PHILIPPE LOPEZ (AFP/File)

Paris on Saturday made face masks compulsory outdoors in crowded areas and tourist hotspots, as infections in and around the French capital rose and the global death toll crept past 722,000.

The decision to make face masks mandatory outdoors in Paris and its surrounding areas from Monday morning was widely expected after a formal request earlier in the week by mayor Anne Hidalgo.

The mask will be obligatory for all those aged 11 and over "in certain very crowded zones", said a police statement.

They include the banks of the Seine River and more than a 100 streets in the French capital, including tourist destinations like Montmartre, where the Sacre Coeur basilica is located.

In the southern English resort of Brighton, people have flocked to the beaches as temperatures soar. By Glyn KIRK (AFP)

"All the indicators show that since mid-July the virus is again circulating more actively in the region," said the statement.

Around 400 people were testing positive for COVID-19 in the region every day, with the 20-30 age group particularly affected.

As temperatures soared across western Europe, holidaymakers crowded beaches despite health warnings about the risk of infection.

On Saturday, a day after Britain recorded its hottest August day in 17 years at 36.4 degrees Celsius (97.5 Fahrenheit), much of its southern coastline was packed with tourists.

Number of new cases per day, trend in countries and regions. By Simon MALFATTO (AFP)

By lunchtime, officials in Bournemouth were calling on people to stay away from the golden seven-mile beach, warning that most of the stretch was so busy that "safe social distancing is not possible".

Local authorities in Germany warned that some beaches and lakes would be closed if there were too many people.

Some places of work remain vectors of infection. Meat giant Danish Crown announced Saturday that it had shut down a major slaughterhouse in Denmark after nearly 150 employees came down with the virus.

As of 1600 GMT, Europe has recorded more than 3.3 million cases of coronavirus and suffered 212,861 deaths from the virus, according to an AFP tally drawn from official sources.

But the hardest-hit region, is now Latin America and the Caribbean, with more than 5.4 million cases and at least 215,944 deaths as of Friday.

Women health workers in the front line of the battle against the virus in India want better pay and conditions. By Money SHARMA (AFP)

India meanwhile, has more than two million infections -- its caseload having doubled in three weeks -- and has recorded 42,518 deaths.

It now has the world's third-highest pandemic caseload after the United States and Brazil.

Women health workers in several Indian states staged a two-day strike from Friday and plan a mass protest in New Delhi on Sunday for better pay, a higher pension and anti-virus protection equipment and testing.

Shiksha Rana, a social health activist in New Delhi, told AFP at least 200 health workers -- and their families -- had been infected in the Delhi region alone.

"We had to crowd-fund money for their treatment and food for their families," she said.

Back to school in Gaza

Palestinian children returned to school in Gaza after a five-month suspension due to a coronavirus lockdown -- but with fewer classes and special safety measures in place.

The United Nations agency for Palestinians, UNRWA, said over 285,000 pupils had returned to its 277 schools.

It had provided material to sanitise the schools and trained staff on the measures to take and would review the situation in a week.

Gaza, under Israeli blockade since 2007, has reported 78 cases of the COVID-19 illness, with one death.

Germany meanwhile expanded its list of high-risk countries and regions.

Travellers returning from some regions in Bulgaria and Romania will have to take a coronavirus test -- unless they can supply a recent results showing they have tested negative.

Taiwanese airlines have been innovating to try to alleviate the financial hit for the coronavirus downturn.

China Airlines is offering children courses on how to be flight attendants.