Sunyani Airport To Re-open In October 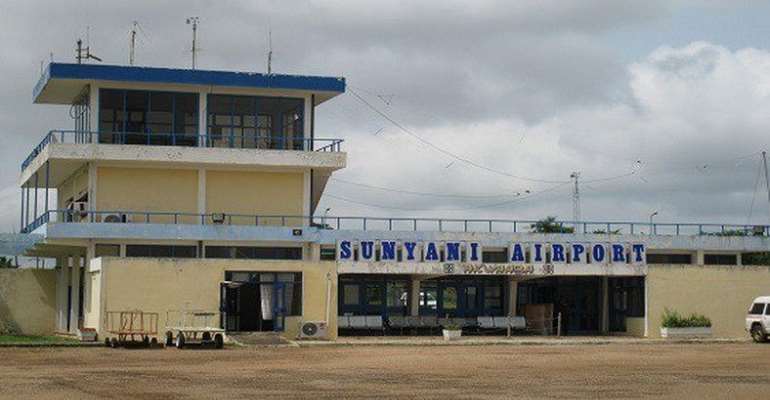 The contractor working on the first phase of the Sunyani Airport rehabilitation project, Resources Access Limited, has assured the Aviation Minister that the Airport would be re-opened in two months’ time.

This is because 85% of the project is complete while efforts are being made to ensure that the remaining works are executed on schedule to the pave for domestic airline operations to bounce back in the Bono region and its surrounding regions.

The Sunyani Airport has been closed-down since 2015 due to problems on its runway and unavailability of an apron, among other reasons.

As part of the Phase One of the project, a 90 by 60 meter apron is being constructed to serve as the parking area for at least two aircrafts while the run-way is also being re-constructed and extended to cover 1,500 meters instead of the current length of 1,200 meters.

Asphalting of the run-way is set to commence soon, according to the contractor executing the project which is estimated to cost 48 point six million cedis.

The Minister of Aviation, Joseph Kofi Adda; together with his Deputy, Yaw Afful and the Bono Regional Minister, Mrs. Evelyn Ama Kumi-Richardson as well as some officials of the Ghana Airports Company Limited have inspected the progress of work on the project.

The arrival and departure lounges were also receiving face-lifts at the time of the visit with fixtures and fittings being worked on.

Speaking to the media after the inspection tour, Mr. Adda said he was satisfied with the progress of work.

The Minister however expressed grave concern about the level of encroachment on several portions of the land meant for future expansion of the airport and called on citizens to desist from trespassing public lands.

The Bono Regional Minster, Mrs. Kumi-Richardson was happy that the airport is about to be re-opened to relieve the people of the area the hassle of traveling by road to Kumasi before accessing air transport services.

According to her, the re-opening of the Sunyani Airport will also go a long way to create jobs for the people of the area.