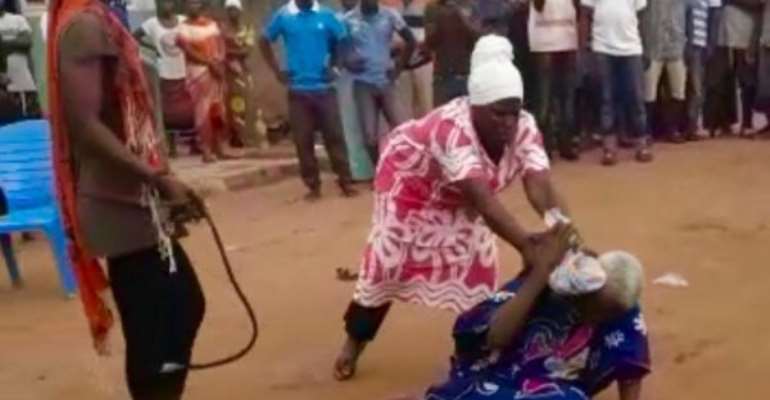 The Krotihene of Adjena Akwamu, Nana Ayimadu Brempong III has called for an immediate network among traditional leaders to deal with inimical harmful traditional practices in the country.

He said it has become necessary due to the increasing act of lynching and mob activities in communities.

Nana Brempong III made the call at a stakeholder's meeting organized by the Ministry of Gender, Children and Social Protection in Accra to address gender-based violence against women and girls.

This followed the lynching of the 90-year old woman, Madam Mariam Akua Denteh, at Kafaba in the East Gonja Municipality of the Savannah Region.

He said the lynching of the 90-year old woman barbaric and needed the attention of all traditional leaders who were the custodian of the laws to ensure such an incident does not occur again.

Nana Brempong III applauded the government and the police for the prompt action they took in ensuring that perpetrators were brought to justice.

They raised concerns about the unfortunate lynching of the old woman and issued a communique to effectively deal with such situations in future to protect the welfare of women and girls.

The Communique called for a nationwide education targeting men and women, boys and girls on the effects of gender stereotypes, attitudes, and beliefs that condone violence and harmful constructions of masculinity.

“Design and implement actions that promote gender equitable norms and behaviours and women's participation in decision-making, Strengthen and increase access to justice, including reparations, as well as access to comprehensive services” it stated.

“The empowerment of women and girls and the eradication of stigmatization of survivors, adoption of approaches at different levels and engaging all segments of society, including traditional leaders, religious leaders, and civil society groups”.

“Strengthen legislation that addresses violence against women. In particular design legislation to punish witchcraft allegations as had been done for Trokosi and Female Genital Mutilation (FGM)”.

It also called for the identification of male and female gender influential people who could champion Gender-Based Violence agenda at the national, regional, district, and community levels; and engage boys and young men to become agents of change and transformation.

Mrs Cynthia Morrison, the Minister of Gender, Children and Social Protection, commended the stakeholders for their participation to deliberate on mechanisms to end the accusation of witchcraft in society.

She said it was wrong to accuse and abuse somebody based on the accusation that such a person is a witch as it is against their fundamental human rights.

The Minister said the government intended to close all witch camps, provide a safe haven for inmates of the camps and reintegrate some back into society.

“Together with our Social Welfare Department, we are looking at rehabilitating some of our buildings to make it a safe haven. What we are looking at most is to put an end to this kind of lynching because you perceive the person to be a witch,” she stated.

The Inspector-General of Police, in a statement read on his behalf by Chief Superintendent Owusuwaa Kyereme, also condemned the lynching of the old woman and assured that the police administration was ready to deepen and foster new partnerships to curb the menace in society.

He said the ordeal was determined to enforce all laws on Sexual and Gender-Based Violence such as trial by ordeal and enforced disappearance under the Criminal Offences Act 1960 (Act 29) as amended, Domestic Violence Act 2007 (Act 732) by ensuring that perpetrators of SGBV do not go unpunished.

The IGP said one of the challenges in enforcing the laws in Ghana was the mode of the trial, thus, in the case of Madam Akua Denteh was that of the indictment.

"This tends to delay prosecutions giving the public the impression that the Police is not doing anything about it. This trial can take up to eight years," he stated.

He, therefore, called for the relevant section of the constitution to be amended to aid in an expeditious trial (Preferential treatment).