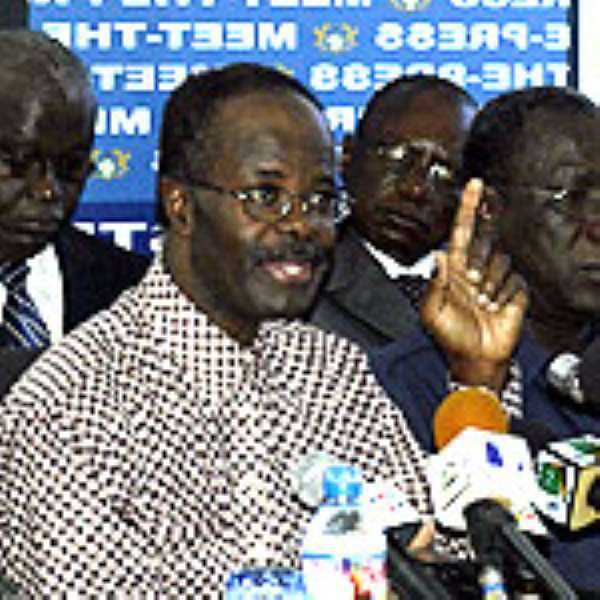 Dr Paa Kwesi Nduom, Minister for Public Sector Reforms has stated that monies given farmers under the Millennium Challenge Account (MCA), to reduce poverty through the modernisation of agriculture, will be in the form of loans.

The credit facility would be given through farmer-based organisations initiated by the Minsitry of Food and Agriculture, and the monies involved will be repaid to enable other farmers benefit from the fund.

The provision of the facility will improve product quality, product processing, reduce post harvest losses and improve on the transportation of goods especially to the urban areas and in the process, increase production of high value cash and staple crops and enhance competitiveness of the agricultural produce on regional and international markets.

Dr Nduom said these when he addressed the press about the Millennium Challenge Account Ghana Programme at a Meet-The-Press Series organised by the Ministry of Information and National Orientation in Accra yesterday.

According to him, the priorities of the Ghana Poverty Reduction Strategy II (GPRS II), which includes human resource development, private sector-led growth and good governance, is similar to MCA's prerequisite of investing in people, encouraging economic freedom and ruling justly.

Apart from supporting the modernisation of agriculture for rural development, the Minister revealed that the MCA will offer opportunity for integrated social and economic development, and also support governance at the district level.

According to him, the experts selected to design the MCA programme chose the agricultural sector after consultation with stakeholders because this sector offers employment to about 60 percent of the work force in Ghana.

This selection, he said, will also be beneficial to women since 60 to 70 percent of the workforce in the agriculture sector are women.

The Minister disclosed that one of the reasons why the Northern Zone was selected is because of the presence of projects like the Savelugu-Nanton Organic Mango Project, which is currently yielding ¢4 million a year per acre, but has no electricity and other infrastructure to enhance productivity.

The Afram Plains was also selected because even though it is considered the nation's food basket, infrastructure to enhance productivity like irrigation, the provision of post harvest infrastructure to preserve the quality of their products, good transport systems and electricity is virtually non-existent.

Under the programme, it is hoped that dependence on generators by these beneficiary farmers will be reduced because electricity will now be supplied to them.

Under the Transport Infrastructure Support Programme, which is part of the MCA, 230 km length of trunk roads will be constructed to link the Afram Basin to the marketing areas.

In all, approximately 950 km feeder roads will be constructed in the three zones. In line with this, Dr Nduom told the press that, President Kufuor will cut sod for the commencement of work on the six-lane 14 km long Tetteh Quarshie – Apenkwa – Mallam Highway expected to ease the movement of produce from the Southern Horticultural Belt to the ports. Transport on the Volta Lake will also receive a boost with the introduction of two ferries.

Under the Institutional Infrastructure Support Programme, US $22 million is to be spent on computerisation and networking of rural banks in the beneficiary districts to facilitate processing of cheques from the fund to farmers.

The minister for Food and Agriculture, Mr. Ernest Debrah, in an answer to a question said government is not going to embark on the State Farm concept, but would continue to support farmers and farmer organization to ply their trade since it has not proven to be viable.

It must be recalled that at the beginning of the month of August, this year, President Kufuor signed the MCA Compact in which Ghana was given a grant of US$547million to improve on its agricultural sector and in the process alleviate poverty especially in the rural areas.

Under the project, the country, which has been zoned into three areas, the Southern Horticultural Belt, Afram Basin and the Northern Zone are made up of 23 districts.

Parliament urged to investigate roles played by SEC/EOCO in ...
16 minutes ago