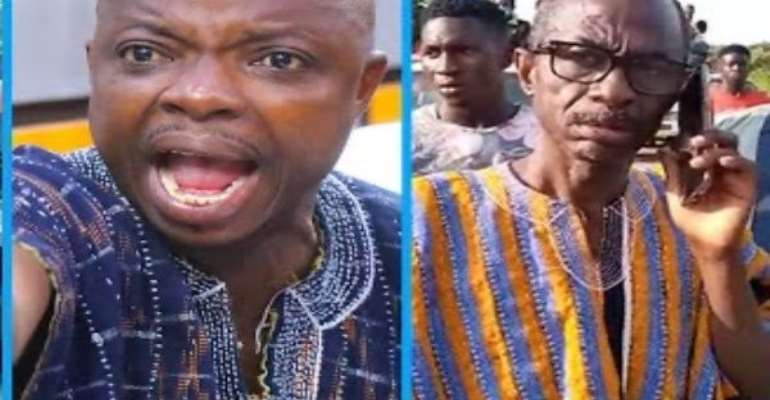 The Bono Regional Chairman of the New Patriotic Party (NPP) in a press release issued on Friday, August 7, 2020, called for the arrest of the NDC Secretary for allegedly transporting non-Ghanaians to registration centres at Banda for registration.

In a reaction to the statement from Abronye DC, the NDC Bono Regional Secretariat says the assertions from the Bono Regional Chairman of the NPP are false.

A statement from the Secretariat noted: “It must be put on record that it is rather the NPP through their Parliamentary Candidate for Banda Constituency and the Chief Executive Officer for Middle Belt Development Authority, Joe Danquah and Abronye DC who are engaged in illegitimately sponsoring and registering Ivoirians as Voters in the Banda Constituency”.

The Party insist that Hon. Asiedu Nketiah has no blood relation to any of the 66 Ivoirians arrested with support of NDC Party Members in both Jaman North and Banda Constituencies who were later handed over to the Ghana Immigration.

In line with that, the Party want the Attorney General’s Office to go ahead and prosecute the 66 Ivoirians who have illegally obtained Ghanaian voters’ ID Cards together with their known NPP guarantors, and their accomplices who hosted them on the nights of August 5 - 6, 2020 and gave them Residential Addresses to support their voter registration process.

Read the full statement from the NDC Bono Regional Secretariat below:

The attention of the NDC Bono Regional Secretariat has been drawn to a Press Release signed by Kwame Baffoe “Abronye DC”, released to the press today, August 7, 2020. Abronye DC generally accuses the NDC and its General Secretary, Hon. Johnson Asiedu Nketiah of leading Ivoirians to register as Voters in Ghana and making outright false allegations against the NDC in an effort to divert the attention of the public on the naked electoral fraud the NPP is perpetrating against the inhabitants of Banda and heating up the scheduled Voters’ Registration Mop-up Exercise in the Banda District.

It must be put on record that it is rather the NPP through their Parliamentary Candidate for Banda Constituency and the Chief Executive Officer for Middle Belt Development Authority, Joe Danquah and Abronye DC who are engaged in illegitimately sponsoring and registering Ivoirians as Voters in the Banda Constituency.

Ordinarily, we would have ignored these spurious daily allegations of Kwame Abronye DC, of which I am sure the press and general public are tired of by now, but it is also necessary we set the records straight about the 66 Non-Citizens who were protected by the entire Banda District Security Committee headed by the District Chief Executive (DCE) to go through the registration process at ease, instead of protecting the integrity of our electoral process and the 1992 Constitution of the Republic as they swore to uphold.

Below are the facts of the matter:

1.These 66 Non-Citizens Abronye talks about were arrested yesterday Friday, August 7, 2020, on board a Kia Truck with Ivory Coast Registration number plate. They were was first chased and intercepted by NDC Branch Executive Members and Party faithful on the morning of August 5, 2020 at Dorbo, a Community in Banda Constituency and close to Ivory Coast Border. Our Party Members later handed over the Vehicle and its Passengers to the Ghana Immigration Officers along that Border Post, who subsequently failed to escort them out of the Country or hand them over to the police for prosecution as the law demands.

2. We had a reliable Intel around 5:30 pm on the same day, Wednesday, August 5, 2020, that the Kia Truck was being escorted into the Country through Makala to Kabronu. I as the Regional Secretary of the NDC for Bono Region personally followed up, took pictures and video clips of these Ivoirians stepping out of the Kia Truck at Kabronu. These videos and pictures I took have been attached to this release as evidence.

3. The case was reported to Ghana Immigration Service Officers in Banda Ahenkro to arrest these people for further interrogation or the vehicle to be towed to the custody of Ghana Police Service. The Driver of this Kia Truck left the vehicle at a vulcanizing shop near Kanka close to Kabronu under the pretext of fixing one of his tires. Again, I personally filed a report on this incident to the District Police Station. Also, Hon. Ahmed Ibrahim, MP for Banda, requested the District Commander to impound the Kia Truck to aid the Ghana Immigration Service to do further investigation, this was deliberately turned down by the District Police Commander.

4. I granted Radio and TV interviews with Journalists on Thursday, August 6, 2020, about the Ivoirians being brought in by the NPP led by Joe Danquah to register in Kabronu near Banda Ahenkro. The Video and audio interviews are available, my interview with UTV on this same incident precede yesterday’s live news video that has gone viral by UTV.

5. Deliberately, no Military Team was ever present or involved in the patrolling of our land borders with Ivory Coast as was done in the Volta Region with Togo borders. Where were the Men of the National Security and State Security Service Officers when we reported the activities of the Kia Truck with Ivoirian license plate to the Ghana Immigration Service and the acting Banda District Police Commander? What is Abronye DC’s locus standi in these vile allegations against Hon. Asiedu Nketiah? When was Abronye DC appointed as the spokesperson for Ghana Immigration Service? He was merely acting out his avowed penchant for malice and disaffection for the NDC and nothing more.

6. It is an accepted fact that it is wrong and illegal for political Representatives or Agents to harass or intimidate potential Registrant and physically prevent them from seeking to register as a Voters. NDC accredited Party Agent, Sekete Samuel Kofi, who was assigned to D/A JHS Kabronu Registration Center in Banda District, where majority of these arrested Ivoirians registered as Voters. Our party Agent successfully challenged 17 suspected Ivoirian Applicants as “NOT GHANAIAN CITIZENS” and hearing notices were subsequently issued to him. The End of Day Registration Report clearly collaborate this claim. It was the NPP Registration Agent at that registration centre who kept pleading for our Agent to withdraw his challenged against 17 suspected Ivoirians. Copies of these documents have been attached to this release as evidence.

7. Voter Registrants at Akayakrom were harassed, violently attacked and chased away while in a cue to register at Akayakrom Funeral Grounds Registration Centre. Evidence can be obtained at the Banda District Police Station and Banda Ahenkro Health Centre.

8. It is a plain lie from Abronye DC to state that, a Kia Rhino Truck containing over 2,000 persons believed to be Ivoirians were led by Hon. Asiedu Nketia, where the entire total registered voters in Banda District for the sixth phase is far below 2,000 registrants. We want to state for the records that, not a single Ewe or people living along the Bui River have been challenged based on “THEIR GHANAIAN CITIZENSHIP”

9. In his usual venomous attitude to any serious political topic in the region, Kwame Abronye rushed to the press to concoct baseless allegation, now it is against a law abiding Hon. Asiedu Nketiah, who has no criminal record unlike Abronye DC with dossier of criminal records.

10. Hon. Asiedu Nketiah has no blood relation to any of the 66 Ivoirians arrested with support of NDC Party Members in both Jaman North and Banda Constituencies who were later handed over to the Ghana Immigration.

11. If the NPP Government led President Nana Addo and his Attorney General believe in Abronye’s baseless allegation, then the Attorney General’s Office should prosecute these 66 Ivoirians who have illegally obtained Ghana Voters’ ID Cards together with their known NPP Guarantors, including their accomplices who hosted them on the nights of August 5 - 6, 2020 and gave them Residential Addresses to support their voter registration process.

We immediately call on the public to disregard the NPP Press Release and we openly refute the Abronye DC’s publication and debunked his unfounded allegations that are being widely circulated as untruth. The allegations are libelous, wicked and a demonic attempt to offend the NDC General Secretary, Hon. Asiedu Nketiah, Hon. Ahmed Ibrahim and the NDC.