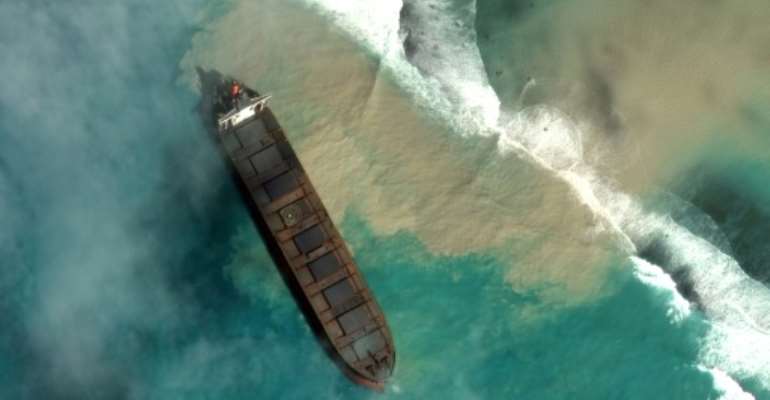 The environment ministry announced this week that oil had begun seeping from the hull. By Handout (Satellite image Â©2020 Maxar Technologies/AFP)

France on Saturday dispatched aircraft and technical advisers from Reunion to Mauritius after the prime minister appealed for urgent assistance to contain a worsening oil spill polluting the island nation's famed reefs, lagoons and oceans.

Rough seas have hampered efforts to stop fuel leaking from the bulk carrier MV Wakashio, which ran aground two weeks ago, and is staining pristine waters in an ecologically protected marine area off the southeast coast.

Prime Minister Pravind Jugnauth declared "a state of environmental emergency" late Friday as oil spilled unabated into the coral reefs, lagoons and white-sand shores upon which Mauritius has built its reputation as a green tourism destination.

"The sinking of the Wakashio represents a danger for Mauritius. Our country does not have the skills and expertise to refloat stranded ships, so I have requested the help of France and its president, Emmanuel Macron," Jugnauth said.

Macron on Saturday said teams and equipment were being deployed from nearby Reunion, a French island in the Indian Ocean, to assist in what Mauritian authorities are calling an unprecedented environmental disaster for the nation.

"When biodiversity is at risk, there is an urgent need for action. France is there. At the side of the Mauritian people," Macron posted on Twitter.

A military aircraft from Reunion would make two rotations over the spill site on Saturday with specialist pollution control equipment and experts aboard, the Prefecture of the South Indian Ocean Defence and Security Zone said in a statement.

The tanker, belonging to a Japanese company but Panamanian-flagged, was carrying 3,800 tonnes of fuel and 200 tonnes of diesel when it struck a reef at Pointe d'Esny, an internationally-listed conservation site near the turquoise waters of the Blue Bay marine park.

The environment ministry announced this week that oil had begun seeping from a crack in the hull, confirming the worst as volunteers rushed to the coast to prepare makeshift containment booms as the major slick drifted nearer.

Aerial images show the enormous scale of the damage, with huge stretches of azure seas around the stricken ship stained a deep inky black. Beaches and sensitive mangrove ecosystems on nearby shores and lagoons have been coated in thick, sticky oil.

A spokesman at Mitsui OSK Lines, which operates the vessel owned by another Japanese company, said fuel was being airlifted by helicopter from the grounded vessel to shore but poor weather was complicating matters.

"We tried to place a containment boom near the ship but it's not working well due to high waves," the spokesman told AFP in Tokyo on Saturday. Some of the fuel was in separate tanks, and may not be at risk of leaking, he added.

Jugnauth has expressed fears the situation could worsen with weather forecast to deteriorate over the weekend.

"It's worrying because the weather is going to get worse again this weekend. We do not know what's going to happen to the boat," he said after visiting the disaster site.

Ecologists fear the ship could further break up, causing an even greater leak and inflict potentially catastrophic damage on the island nation's coastline, which forms the backbone of Mauritius' economy.

Mauritius and its 1.3 million inhabitants depend crucially on its seas for food and for tourism, boasting some of the finest coral reefs in the world.

Twenty crew members were evacuated safely from the ship when it ran aground on July 25.