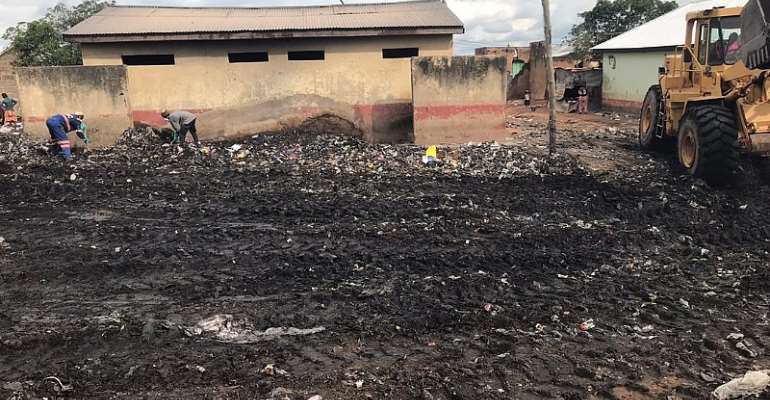 A resident of Lamashegu in the Northern Region, Madam Hajia Maria, heaved a sigh of relief as a waste management company, Zoomlion Ghana Limited (ZGL), in partnership with the Sanitation Ministry, embarked on a clean-up exercise to clear a heap of refuse in the community.

The exercise followed a virial video by Madam Hajia Maria, appealing to the President, Nana Addo Dankwa Akufo-Addo, and the sanitation ministry to intervene in ensuring that a hump of refuse in the community which was posing health risks to the residents was cleared.

And following that appeal, Zoomlion responded swiftly by evacuating the refuse, bringing smiles to the faces of the community members. The exercise was carried out as early as 7:00 a.m., Zoomlion had deployed a wheel loader and five garbage trucks at the refuse location to facilitate the exercise.

The exercise, which lasted for five (5) hours, witnessed many of the community members expressing delight at the clearing of the refuse.

The Assemblymember for the area was equally glad and thanked Zoomlion and all the stakeholders who helped in the exercise.

Speaking shortly after the exercise, Hajia Maria, who was highly elated, expressed her gratitude to President Akufo-Addo, the sanitation minister and ZGL.

She gave the assurance that she will lead the attitudinal change in the community.