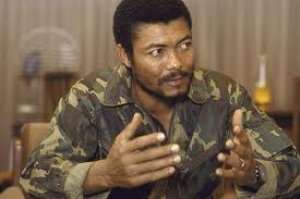 A leading member of the National Democratic Congress (NDC), Bede Ziedeng confessed that former President, Jerry John Rawlings indeed squeezed his balls at the 2002 congress of the party in Koforidua.

Prof Kwamena Ahwoi in his book, ‘Working with Rawlings’ narrated how the unfortunate incident occurred at the congress which saw the election of Obed Asamoah as the party’s chairman.

“As Bede tells it when Rawlings and his entourage got to the entrance and the crowd surged forward to acknowledge their hero, Rawlings got hold of his testicles and squeezed them hard, so hard that he believes he fainted.

“When he recovered, he was outside the Congress Hall and people were fanning him,” he narrated in the book.

Prof. Awhoi said he confronted the former President on the matter but he laughed over it, stating “I should have squeezed them harder”.

Commenting on this incident on Peace FM’s Kokrokoo, Editor-in-Chief of the New Crusading Guide Newspaper, Abdul Malik Kweku Baako said he knew of this incident prior to the release of the book.

According to him, Bede Ziedeng who is a close friend of his confessed to him after the congress how he suffered at the hands of the NDC leader.

“I knew of this incident, Bede is a friend and he confessed that to me so I will be shocked if he comes out to deny this…,” Kweku Baako said.

Ghana Would Be Cursed Should We Vote Against Akufo-Addo — La...
1 hour ago