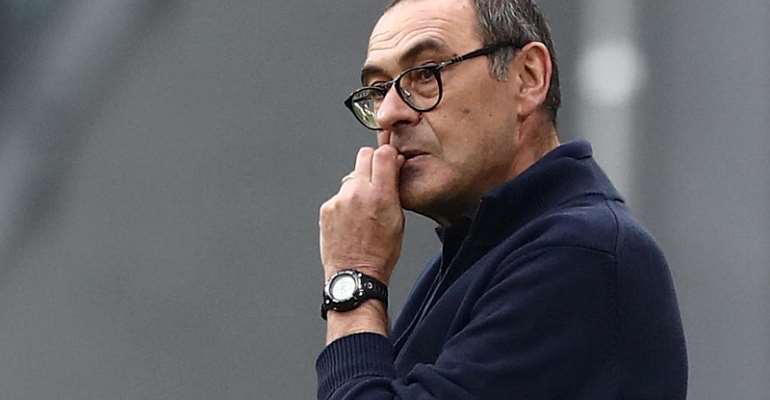 Juventus boss Maurizio Sarri has played down talk that he could be sacked if his side were to lose Friday night's Champions League last-16 second leg match against Lyon.

Juventus trail the Ligue 1 outfit 1-0 after the game in France in February just before Italy and France went into lockdown as part of their government's attempts to stem the spread of the coronavirus pandemic.

"I don't think my future is riding on this game," said Sarri. "Thinking this way you make the club directors look like amateurs.

"I think I'm dealing with high level directors. They will decide whether to continue or to change. But it doesn't depend on a single game."

Juventus emerged from the three-month suspension of top flight football to see off the challenge of Lazio and Atalanta and claim the 2020 Serie A title - their ninth championship in a row.

"We are happy to have won possibly the most difficult Serie A in history," added Sarri. "But the important thing now is to get to Portugal and play the final eight as it would mean joining the world's elite.”

Chance
While Juventus - as Italian champions - have qualified for the group stages of next season's Champions League, Lyon's only chance of joining them in the 2020/21 competition is by claiming this season's competition.

"I think the whole team deserves credit for the first game that they played against Juventus,” said Lyon skipper Memphis Depay.

But since the French league was terminated early due to the coronavirus pandemic, Lyon have had only one competitive game - a defeat after extra-time and penalties in the League Cup final against Paris Saint Germain on 31 July.

“The disadvantage lies with us in terms of lack of rhythm,” said Lyon boss Rudi Garcia. “We showed that we were physically ready in the League Cup final over 120 minutes. So that, I hope, should help in the match against Juventus.”

The winner of the clash at the Allianz Arena in Turin will join PSG, Atalanta, RB Leipzig and Atletico Madrid in the last eight.

Manchester City or Real Madrid who play on Friday night at the Etihad Stadium will also advance to the series of one-off games in Lisbon from 12 August.

The other two quarter-final berths will be decided on Saturday when Bayern Munich take a 3-0 lead into their second leg against Chelsea and Barcelona welcome Napoli to the Camp Nou with the tie at 1-1.