Election 2020: Challenging My Opponent's Identity Will Not Stop Him From Voting, It's Needless — Ellembelle MP 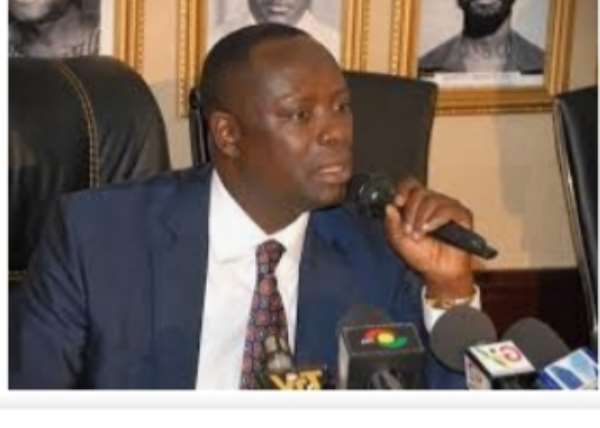 The Member of Parliament (MP) for Ellembelle Constituency in Western Region, Emmanuel Armah Kofi Buah, has called for calm to prevail following the decision by one of the electorates in his constituency to challenge the identity of Kwasi Bonzoh, his opponent representing the New Patriotic Party (NPP) in the 2020 Parliamentary elections.

He believes, what happened was completely out of step with his political career, academic training, lifestyle in politics, and the kind of leadership traits he has accumulated over the years, and continues to display in his public life. “We must do things that bring peace and unity in our communities this is not one of them,” he said.

The reaction of the MP had followed reports that the New Patriotic Party's (NPP's) Parliamentary Candidate for Ellembele, Kwasi Bonzoh, had been refused his Voter ID card by officials of the Electoral Commission (EC) after he registered last week.

This was after a resident identified as Solomon Isaac challenged his registration at the Awiebo Junction D/A Primary School registration centre.

But, speaking in an interview with journalists, the seasoned lawmaker, Emmanuel Armah Kofi Buah cautioned his constituents against acts that have the potential to create division and disturb the peace.

"I have always represented peace, unity and tranquillity. We must be striving for excellence, putting in place adequate measures to transform our communities to gain development projects that are tangential and not dwell so much on peripherals".

According to the former Minister for Petroleum in the erstwhile government, challenging the identity of the NPP Parliamentary candidate will neither stop him from voting. You will not win," he noted.

He added, "The person has been a known constituent, and currently he is holding a position in government as the representative of the president and in the constituency as the Parliamentary candidate of NPP, therefore, what at all will anybody be looking for in challenging his identity."

For him, the action of Solomon Isaac, was ill-informed, and needless.

"Here we are in the constituency, knowing that the person has been contesting the elections and has been losing, therefore making him a serial loser, why do you challenge the Identity of a serial loser. You just have to allow him to receive his voters Identification card, and as usual, receive another defeat to silence him for good”.

Armah Kofi Buah, explained that although he has decided to allow sleeping dogs lie, to restore the dignity of the constituency as one of the most peaceful constituencies in Western Region, many of the electorates in Ellembelle have called to accuse the District Chief Executive (DCE) of the area who is also the NPP Parliamentary candidate as the brain behind the political gimmicks.

"Although I will ordinarily not want to believe these accusations, but if the candidate is behind this elementary political tactics, then I will advise all my supporters and constituents to disregard it"

He continued "Just as the electorates in the constituency are already aware of the monumental failure of this government, and the abysmal performance of the DCE in the Ellembelle District as many will attest to, we just have to go all out and angrily register to vote out this epileptic government destroying jobs, siphoning national resources with wanton dissipation, and causing so much of insecurity in the country with deployment of soldiers in places hitherto considered very peaceful"

The MP said the electorates in Ellembelle and all parts of Ghana, have never been angrier, and hungrier for change in an election year than this year, and therefore were just waiting patiently and anxiously for the 7th December polls to make the decisive statement for change at all polling stations across the country.

The victory of the MP in the 2020 elections, will historically pave way for him to set an arduous record in Ellembelle as the first lawmaker to have won the seat.

His predecessor, now the national chairman of the NPP, Freddie Blay, managed to secure three terms on the ticket of the Convention People's Party (CPP) and was subsequently booted out of office by the electorates through an instrumental campaign mounted in 2008 by the incumbent Member of Parliament, Emmanuel Armah Kofi Buah.

The MP has therefore been described in the political circles as the messiah of Nzema following landmark achievements recorded over the years interlaced with development projects extended to Ellembelle and other parts of Nzema while in government and in Parliament.

The people of Ellembelle and for that matter the electorates, he underscored have entered into an agreement with his performance in Parliament, and an executive role in government, and will renew his mandate in December.

A Distressful Experience with the Covid-19 Management/Contai...
17 minutes ago