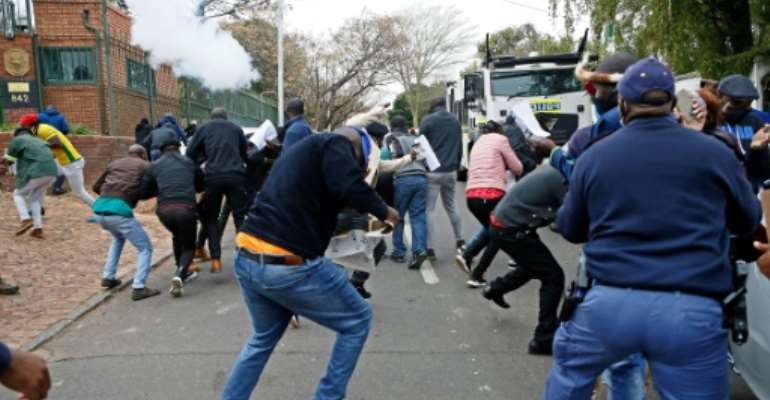 Protesters run from a stun grenade fired by police outside the Zimbabwean Embassy in South Africa's Pretoria. By Phill Magakoe (AFP)

South African police fired rubber bullets and stun grenades to disperse dozens of protesters outside the Zimbabwean embassy in Pretoria on Friday, an AFP photographer said.

Close to 100 mainly Zimbabwean migrants in South Africa gathered to protest economic hardship and a recent crackdown on dissent and political opposition back home.

Earlier this week Zimbabwe's President Emmerson Mnangagwa vowed to "flush out" critics who he described as "dark forces" and "terrorists" after the authorities thwarted anti-government protests.

On Friday police were seen pushing and shoving the protesters from the front of the Zimbabwean embassy building, situated in a leafy Pretoria suburb not far from the Union Buildings, the seat of South Africa's government.

Some protesters were drapped in Zimbabwe's national flag, while others waved cards, one reading "Mnangagwa: You are going to The Hague! Murderer! Thief!"

South African President Cyril Ramaphosa on Thursday said he had appointed two special envoys to go to Harare "following recent reports of difficulties that the Republic of Zimbabwe is experiencing".

Mnangagwa took over from longtime ruler Robert Mugabe after a coup in November 2017 and many Zimbabweans complain that the country's situation has only gotten worse since.

The Zimbabwean government has dismissed allegations of rights abuses and a crisis in the country as "false".

"There is no crisis or implosion in Zimbabwe. Neither has there been any abductions or 'war' on citizens," government spokesman Nick Mangwana said in a statement.

Protesters at the Zimbabwean embassy in South Africa. By Phill Magakoe (AFP)

Also on Friday, Human Rights Watch said at least 60 people in Zimbabwe had been arrested in connection with the failed protests last Friday.

"The Zimbabwe authorities have increasingly arbitrarily arrested critics of the government," the rights watchdog said in a statement.

It urged the regional bloc Southern African Development Community (SADC) and the African Union to "urgently and publicly speak out against the Zimbabwe government's crackdown on peaceful anti-corruption protests on July 31, 2020".

The High Court in Harare on Friday denied bail to the opposition politician who called the protests.

It was Jacob Ngarivhume's second attempt for bail following his arrest days before the planned protests.

A magistrate court had last month rejected his bail application and he appealed to the High Court.

"The defence council did not convince the court that if released the accused will not participate or invite demonstrations," High Court judge Tawanda Chitapi said.