By David Esnault and Christophe Koffi 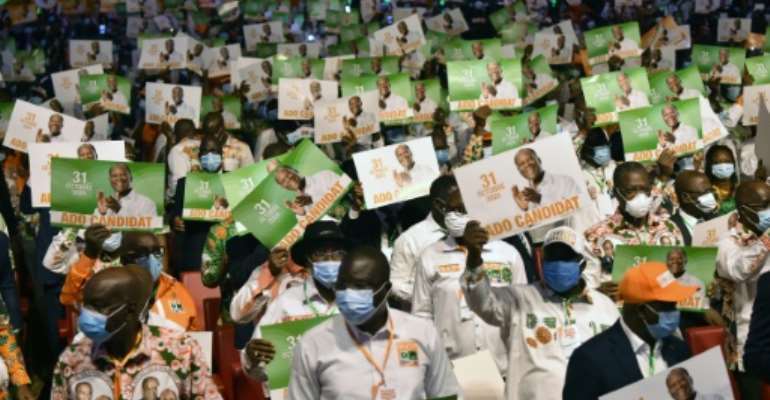 A new constitution was adopted in 2016, which President Alassane Ouattara and his supporters argue reset the clock, allowing him to run again. By SIA KAMBOU (AFP/File)

Ivory Coast President Alassane Ouattara's decision to run for a third term in October's presidential election triggered outrage on Friday among opposition and civil society groups, who labelled it a "coup" that risked tipping the country into chaos.

Ouattara, in power since 2010, said in March that he would not run for re-election, which the opposition has strongly maintained he was unable to do anyway because the constitution limits presidents to two terms.

But the race was turned on its head by the sudden death of prime minister Amadou Gon Coulibaly -- seen as Ouattara's anointed successor -- from a heart attack in July.

The shock news ramped up the volatility for the tense October 31 vote, which takes place in the shadow cast by political violence following 2010's election in which around 3,000 people died.

Ouattara said on Thursday that he would run after all, citing "a case of force majeure" after the death of his ruling RHDP party's candidate Coulibaly "left a void".

But a new constitution was adopted in 2016, which Ouattara and his supporters argue reset the clock, allowing him to run again -- an interpretation strongly contested by the opposition.

Assoa Adou, the general secretary of the Ivorian Popular Front (FPI), one of the country's two main opposition parties, said: "Alassane Ouattara cannot in any case stand in the election. His own experts have said so."

N'Goran Djedri of the West African country's largest opposition party PDCI said Ouattara "is not above the law".

"The people of Ivory Coast must demand the exact application of the 2016 constitution, which stipulates in article 183 that the legislation currently in force remains applicable."

Ivorian President Alassane Ouattara has been in power for a decade. By SIA KAMBOU (AFP/File)

Moussa Toure, the communications director of presidential candidate and former prime minister Guillaume Soro, said: "We are facing an organised state coup in the sense that Mr Ouattara's plan constitutes a serious violation" of the constitution.

"His decision to run for a third term takes us back 10 years and risks plunging Ivory Coast back into a period of fear, division and chaos," Toure added.

It was not just opposition parties expressing outrage.

"By succumbing to the temptation of political eternity, you risk driving Ivory Coast into chaos," popular Ivorian singer Meiway said on social media. "Are you to sacrifice everything you have built to put yourself on the wrong side of history?"

Satirical writer Gauz said the "old are not wise, they act like they're in a playground," referring to both 78-year-old Ouattara and his arch-foe and biggest rival, 86-year-old former president Henri Konan Bedie of the PDCI.

"It is despairing for the youth who represent four fifths of the Ivorian population," Gauz added.

The leaders of Ouattara's ruling RHDP did not respond to requests to comment on Friday.

But Ouattara did lead a 15-minute ceremony at the presidential palace on Friday marking the 60th anniversary of Ivory Coast's independence, after the celebrations were scaled back due to the coronavirus pandemic.

After his announcement on Thursday, RHDP supporters celebrated in the economic capital Abidjan, the second-largest city of Bouake and Ouattara's stronghold of Korhogo, according to AFP journalists and residents.

"It is an immense joy which animates us. We are going to make short work of our adversaries" in the election, said Siaka Sylla, an RHDP youth leader in Bouake.

The election comes after a low-level civil war and political turmoil that erupted in 2011 when former strongman Laurent Gbagbo refused to cede power to Ouattara after losing elections. The ensuing unrest claimed some 3,000 lives.

Former rebel chief Soro is also running but he lives in self-imposed exile in France, facing a long list of legal problems.

Gbagbo, freed conditionally by the International Criminal Court for crimes against humanity over the 2010-2011 bloodshed, has applied for a passport so that he can return home for the election.