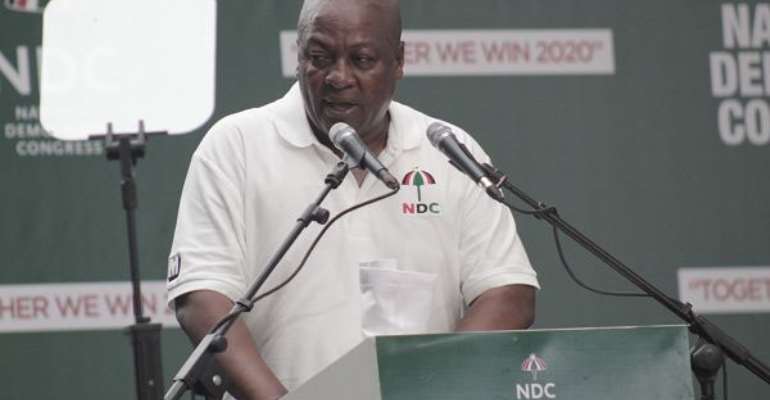 The Ashanti Assembly Members Caucus (ASMC) has warned ex-President John Dramani Mahama to desist from trying to use assemblymen to help his agenda to win the 2020 polls because it will not work.

The ASMC, which is made up of assemblymen from the various electoral areas in the Ashanti Region, insists it has detected that Mr. Mahama has a hidden agenda to use assemblymen to champion his ambition.

Addressing a press conference in Kumasi on Tuesday, Isaac Ohemeng, who is the Dean, Conference of Presiding Members, Ashanti, who spoke on behalf of the ASMC, said Mr. Mahama should quickly revise his notes.

He stated emphatically that assemblymen in Ghana are discerning and have integrity; therefore, any attempt by Mr. Mahama to use what he called 'fake' promises to 'entice' assemblymen to do his bidding for him would fail.

According to him, Mr. Mahama's promise of ensuring that assemblymen would be paid monthly stipends should he win the 2020 polls, during a meeting with some assemblymen on July 30, is “a big lie”.

“For instance, in the NDC 2012 manifesto, similar juicy promises were made to assembly members but to no avail,” Mr. Ohemeng recounted and said Mr. Mahama was trying to 'fool' members, but it would not work.

According to him, the splinter group comprises dyed-in-the-wool NDC members, who have been engaged by Mr. Mahama to criss-cross the country to confuse assemblymen to follow the NDC, saying “we are watching them.”

Furthermore, Mr. Ohemeng said Mr. Mahama's assurance of empowering assemblymen by handing over to them the issues pertaining to birth and death registration in their respective localities is another blatant lie that should be jettisoned.

“The Legislative Instrument (LI) 1967 schedule 4, Regulation 25 spelt out that Unit Committee shall handle issues pertaining to birth and death registration in their respective localities or electoral areas under the guidance of the registrar of births and deaths.

“Hence, for the former President to promise those assembly members he recently met that he would hand over to them the duties and roles assigned Unit Committee Members is neither here nor there, and a serious breach of the Constitution and the Local Government Act 936 of 2016,” he stated.

Mr. Ohemeng said Mr. Mahama, as President for four years and Vice-President for another four years, had all the chance to ensure the payment of monthly stipends to assemblymen “yet he failed to do it so he should stop the blatant lies he is issuing to woo assemblymen into his weak campaign.”