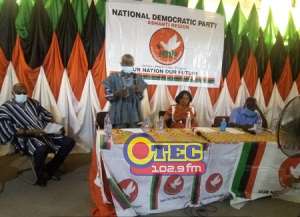 The National Democratic Party (NDP) has targeted 15 parliamentary seats in the Ashanti Region for grabs in the upcoming December 7 general elections.

The party says it has put in place appropriate measures and done with the self-introspection which points to the fact that the target is feasible and achievable.

The newly elected Ashanti Regional chairman, Nana Opoku Agyemang, gave the hint when the regional executives were sworn-in in Kumasi on Thursday, August 6

The swearing-in was done by the General Secretary of the party, Alhaji Mohammed Frimpong and graced by the Acting National Chairperson, Becky Akufo Amoaben and Secretary of North America/Canada/Europe branch of the party, Nana Osei Mensah Bonsu

Though he refused to mention the target constituencies, he said the party has done enough preparations, in both human and capital resources, capable of winning the seats, an area dominated by the NPP.

“The party has been in secret preparations since 2012 when the party was disqualified by the Electoral Commission in 2012. In 2016, the party amassed more than 16, 000 votes with the problems it encountered, an indication that the electorates have accepted us and will to send us to Parliament to represent them,” he posited.

He added that “the National Executives are ready to offer us the needed supports to win the 15 seats in Ashanti, based on the assurance given by the electorates, and will embark on massive campaigns to achieve the targets."

The elected Ashanti Regional Executives consist of Nana Opoku Agyemang as the Chairman, Hajia Kandey as the Secretary, Elizabeth Asiamah as the treasure and Abdul Rashid Muslim as the Youth Leader.

Others are Irene Antwi as the Women’s Leader, Abdul Razak as Communication Leader and Stephen Manu as his Deputy.

I'm grateful to be named by Forbes as African of the Year — ...
49 minutes ago

Covid-19: We oppose singling out African countries for trave...
49 minutes ago