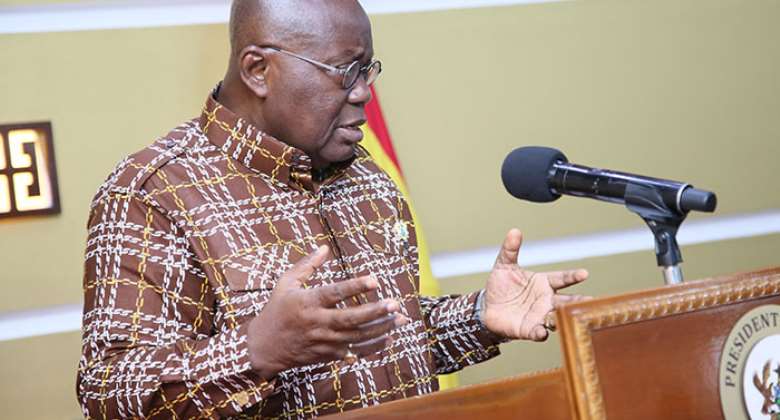 According to him, the highly touted 'massive infrastructure development' claimed by the NDC administration ahead of the 2016 general election was just propaganda because upon assumption of office, what the Akufo-Addo administration saw on the ground did not reflect the 'massive' projects the NDC claimed it left behind.

President Akufo-Addo explained that in his quest to build a better nation, the New Patriotic Party (NPP) government had to strategize carefully to be able to surmount the huge task ahead, adding that so far his administration has been able to move the country forward in a positive direction in his four-year mandate.

The President made the comment on Wednesday, August 5, when he paid a courtesy call on the Akwamuhene, Odeneho Kwafo Akoto III, ahead of the commissioning of an NBBSI Business Resources Centre at Senchi in the Asuogyaman District of the Eastern Region during his regional tour.

In a brief remark, the President said, “At first we were made to understand that the roads have been done if you will remember. We were told we have seen unprecedented infrastructural development. And it turned out it wasn't true. Across the country, the roads were in a very poor state. That is the situation I inherited.”

President Akufo-Addo stated, however, that despite the huge infrastructural deficit inherited, strides had been made to get many roads fixed across the country, with further commitment reinforced by the declaration of 2020 as the year of roads.

“We've gone very far. I think that anybody who is sincere can look across the country. Firstly, I think there are two things about these roads. All of us came together then we unleashed a massive programme of roads rehabilitation across the country. People can see that indeed the roads are being tackled,” he pointed out.

He indicated that with time, people are getting to know that the NPP administration came to develop the country, saying he was hopeful the people would give him and his party another four-year mandate to continue to push for accelerated development.

Touching on land issues, he promised to set up a committee to investigate lands belonging to chiefs that have been taken by government across the country to promote peace.

The Paramount Chief of Akwamufie, Odeneho Kwafo Akoto III, in his earlier remarks, expressed gratitude to President Akufo-Addo for bringing development to his area.

He expressed worry about the deplorable state of roads in the area, particularly Akosombo and Mpakadan, and pleaded with the President to see to it.

He commended the government for the implementation of flagship programmes such as Free SHS, the construction of the railway and others in the area and was hopeful the NPP government would provide better things to their area.

“Though we have the Dam, there has not been any proper plan to benefit the people of Akwamu. Most of our lands have been taken by government and has been invested in the Volta River project though they are done with the project; the remainder of the land is still in the hands of the VRA.”