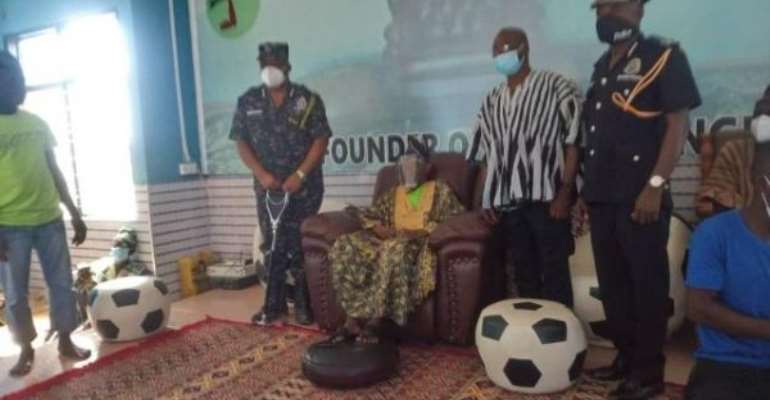 The Yagbonwura Tutumba Bore Esa, the King of the Gonja Kingdom, has commended the security personnel for their swift response to issues in the Savannah Region particularly, the lynching of the 90-year-old woman.

He said, "The Gonja Kingdom wholeheartedly welcome the arrest of the Kafaba killing and wish to further express our satisfaction with the arrest of about seven persons believed to have taken part in the lynching of Akua Denteh, the 90-year-old woman who was accused of witchcraft at Kafaba in the East Gonja Municipality."

He further commended the Regional Police Command for reducing the crime in the region.

He pledged the Kingdom's continued support to the Regional Police Command to combat crime in the region.

The Yagbonwura made the remarks when the Inspector General of Police (IGP) Mr James Oppong-Boanuh, paid a courtesy call on him as part of his working visit to the region.

He appealed to the Police Command to establish police posts to serve Makango, Larabanga, Kong Traditional Area and the Kusawgu - Tulwe enclave to enhance security.

The IGP commended the Yagbonwura and the Regional Minister for the support provided to security personnel in the region to enhance their work.

He appealed to the people not to relent in their efforts in supporting the service to combat crime in the region.

He noted that the country recorded some challenges in the voter registration exercise, where some lawless youth caused violence, saying

"It is a very worrying development and the Police are ready to collaborate with all stakeholders to educate the youth to avoid violence during this year's elections."

He advised the youth not to allow politicians to use them as tools for violence.

The visit of the IGP was to enable him to assess the security situation in the region and to prepare personnel ahead of the 2020 general elections.