African leaders who stay in power via constitutional change 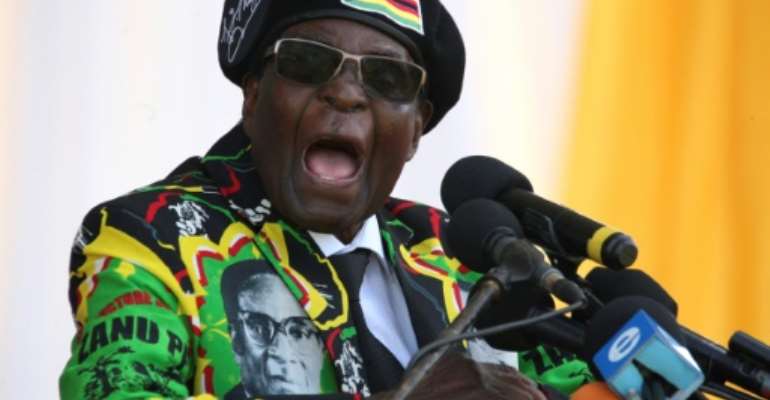 Zimbabwe's Robert Mugabe gained a further term in office thanks to a new constitution. By ZINYANGE AUNTONY (AFP)

Guinean President Alpha Conde on Thursday gave his strongest signal yet he will seek a third term in office -- a prospect opened up by a revamped constitution that critics say sidesteps the country's two-term limits.

Here is a factbox on other leaders in sub-Saharan Africa who have sought to extend their time in office through constitutional change.

- Comoros: A constitutional referendum in 2018 enabled President Azali Assoumani to be elected a second time the following year, in polls marred by allegations of fraud.

- Rwanda: Constitutional reforms voted by referendum in 2015 allowed President Paul Kagame to secure a new term in 2017 and in theory rule until 2034.

- Republic of Congo (Brazzaville): Landslide approval in 2015 on constitutional changes allowed veteran ruler Denis Sassou Nguesso to run for a third term. He was re-elected in 2016.

- Zimbabwe: A new constitution adopted in 2013 let Robert Mugabe stand in another election, which he won. He was forced to step down in 2017, after 37 years in power, and died in 2019.

- Djibouti: Parliament approved a constitutional amendment in 2010 allowing President Ismael Omar Guelleh, in power since 1999, to run for a third term. He was re-elected in 2011 and 2016.

- Cameroon: Parliament in 2008 revised the constitution, scrapping term limits on presidents. Paul Biya, in power since 1982, was elected for a seventh term in 2018.

- Uganda: Constitutional changes in 2005 removed limits on presidential terms. In 2019, the Supreme Court also confirmed the quashing of the age limit for the presidency, allowing Yoweri Museveni, in power since 1986, to stand for re-election in 2021.

- Chad: Idriss Deby Itno has been in power since 1990 thanks to a constitutional revision in 2005, adopted after a disputed referendum. In 2016 he was re-elected for a fifth term.

- Togo: A constitutional amendment in 2002 allowing the president to seek reelection without limit paved the way for Gnassingbe Eyadema, in power since 1967, to win another term. When he died in 2005, his son Faure Gnassingbe took over and has since won four contested elections.

- Burkina Faso: The announcement in 2014 that long-serving president Blaise Compaore sought to extend his rule beyond 30 years sparked mass protests. Compaore was forced to stand down.

- Zambia: Frederick Chiluba was forced in 2001 to bow to popular pressure after trying to change the constitution in order to get a third term.

- Malawi: Parliament in 2002 blocked Bakili Muluzi from seeking a third mandate in the 2004 elections.

- Burundi was plunged into a bloody political crisis in which at least 1,200 were killed, after Pierre Nkurunziza won a highly controversial third term in 2015. He stunned observers by not standing for re-election in 2020, despite a referendum in 2018 allowing him to do so. The ruling party's candidate Evariste Ndayishimiy was elected in May. Nkurunziza died on June 8.

- In Ivory Coast, Alassane Ouattara, in power since 2011, announced in March he would not run in the October election, though an earlier change to the constitution he claimed gave him the right to do so. Amadou Gon Coulibaly was nominated as the ruling party's candidate but he died suddenly in July and Ouattara has been under pressure to run.