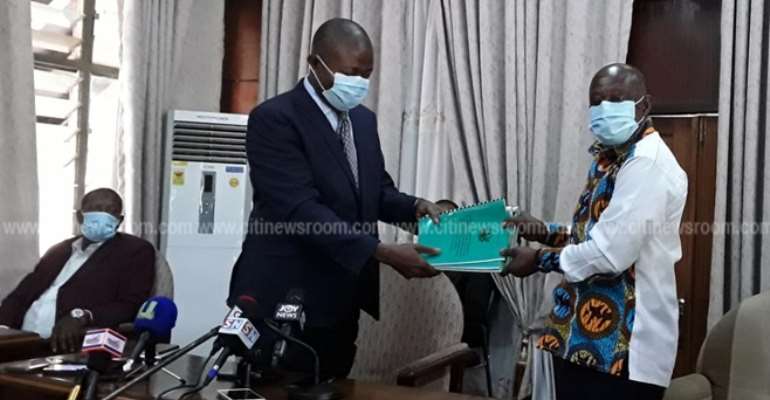 Another six-member committee that was set up by the Ghana Education Service also submitted its report to the Director-General of the GES last month.

Both committees were tasked to investigate circumstances that led to the death of the final year student, Leonard Sam.

They were also asked to investigate protests by students who accused authorities of negligence leading to the death of their colleague.

The committee lead by a High Court judge, Justice Samuel Obeng-Diawuo says all persons interviewed during its sittings were cooperative.

Justice Samuel Obeng-Diawuo, the committee chair in presenting their report said their findings represent all the facts of the incident.

“We on our part have tried and have come up with our report in the stipulated time. We wish to thank the Regional coordinating council for the support that was extended to us throughout our deliberations and also all the witnesses we invited, they were very cooperative and assisted us in all our deliberations. We have tried our best to come up with this report, which in our opinion is a fair representation of all the facts leading to this incidence which occurred at the KNUST secondary school.”

Ashanti Regional Minister, Simon Osei Mensah after receiving the report said it will be forwarded to the Education Minister for further action.

“The committee has now completed its work and it’s yet to submit a report to me for onward transfer to the Minister of Education. The basis for the composition is in section 188 of the local governance act 936. The Security and Intelligence Act gives that power to the Regional Security Council to also conduct investigations into such matters when some security issues are involved.”

Students of the Kwame Nkrumah University of Science and Technology Senior High School (KNUST SHS) on Tuesday, 7th July 2020 held a protest against the school authorities following the death of a student.

According to the students, the deceased, Leonard Sam who had an ulcer and was ill was not attended to adequately by the school authorities.

Headmistress of the school, Felicia Asamoah Dankwaa who was accused of negligence by her students was interdicted by the GES.

Two other staff, Owusu Ansah Seth, a senior housemaster, and Anthony Awotwe, a housemaster for the Densu house, where the deceased student resided, were also asked to step aside for investigations to proceed.

A/R: Journalists on tour with Regional Minister involved in ...
7 minutes ago

Focus on promoting human rights, be swift and fair in applic...
9 minutes ago