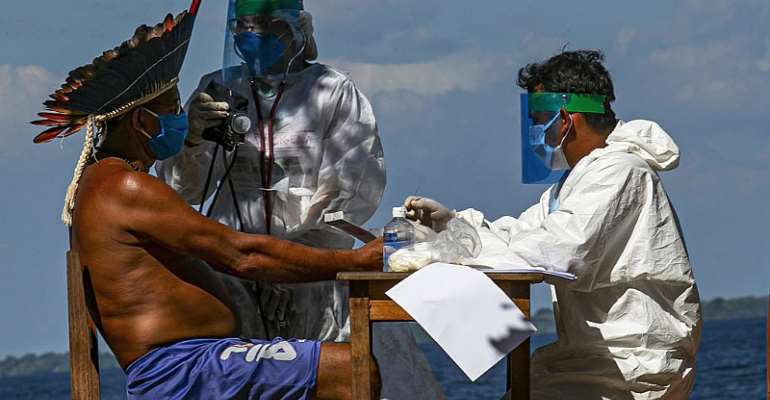 As Brazil nears the 100,000 mark in Covid-19 deaths, a Supreme Court order on Wednesday compelled the federal government to adopt protective sanitary measures for the country's indigenous population. The ruling is a symbolic landmark for Brazilian native Indians in their fight against a government they accuse of grave atrocities.

According to the injunction, a committee comprising indigenous representatives and government officials will have to implement social distancing measures in remote villages, as well as ensure access to health services for all indigenous communities.

'Invaders' of ancient territory
11 judges of Brazil's Supreme Court approved the order, while one of them also asked for 'invaders' to 'retreat' from indigenous soil.

This refers to the presence of illegal miners on indigenous land, who increase the chances of contagion in far-off areas in the Amazon.

Brazil's far-right government is accused of not helping the indigenous population deal with the pandemic.

Instead, president Jair Bolsonaro is accused of turning a blind eye to illegal land-grabbers who encroach each day on ancient native Indian land and resources.

Accusations of 'genocide'
Indigenous rights group APIB says that more than 600 indigenous people have died and more than 22,000 are infected with Covid-19.

APIB, as well as personalities like photographer Sebastian Salgado, have accused the Brazilian army of 'genocide'.

In July, the term was used by Supreme court judge Gilmar Mendes, sparking indignant reactions from the Brazilian army, several of whose members occupy positions in the Ministry of Health.

Memories of European colonisation.
Some 800,000 indigenous people in Brazil's remote areas in the Amazon are particularly vulnerable to the virus, as they have little or no antibodies against it.

The health crisis has left them with a cruel choice: stay in their villages with limited medical resources, or head into bigger towns where they might not be able to practice ancestral funeral rites.

Many remote villages are haunted by memories of European colonisers bringing epidemics that decimated indigenous populations at the time, due to the latter's lack of immunity.

'Zero political will'
Medical statistician Domingos Alves from the University of San Paolo told AFP that he expects the number of Covid-19 deaths in Brazil to reach 200,000 by mid-October, maybe even earlier.

Alves claimed that the official number of confirmed cases were 'six or seven times lower' than the 'real figure'.

“The federal government continues to consider it a 'little flu', " Alves said.

“The plan is to sacrifice the Brazilian people to achieve an economic pseudo-recovery…There is zero political will, and science was sidelined in our country a long time ago."

At the same time, unemployment in Brazil rose to 13.3% in the second quarter of 2020, the highest figure in three years.