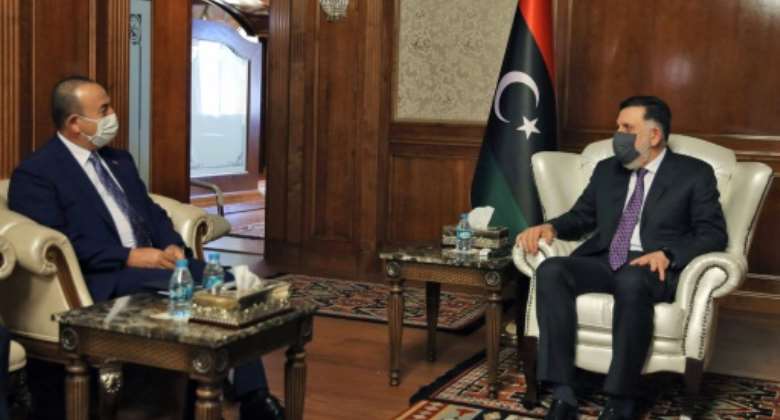 The head of Libya's UN-recognised Government of National Accord Fayez al-Sarraj (R) holds talks in Tripoli with Turkish Foreign Minister Mevlut Cavusoglu whose country backs the GNA in its fight against eastern-based Libya strongman Khalifa Haftar. By - (AFP)

Turkish Foreign Minister Mevlut Cavusoglu held talks Thursday in Tripoli with the head of Libya's UN-recognised government on a political solution to end the country's conflict.

"Even if there is no officially declared ceasefire, calm reigns on the ground" for now, Cavusoglu told reporters after the meeting.

But "Libya's problem persists", he added.

A "durable" ceasefire should mean that the GNA, Libya's "legitimate government", is able to spread its control to the east of Tripoli, in areas currently held by Haftar's forces, Cavusoglu said.

That, he added, means being able to take control of the strategic port of Sirte, gateway to the country's oilfields, and Al-Jufra airbase, to the south.

Haftar, he added, "still does not believe in a political solution and can attack... Tripoli any time".

Haftar launched an offensive last year to seize Tripoli, headquarters of the GNA, but earlier this year forces loyal to the UN-recognised government pushed the strongman from much of western Libya.

GNA forces have also vowed to retake Sirte, the last major settlement before the traditional boundary between western Libya and Haftar's stronghold in the east.

Libya has been mired in chaos since the 2011 overthrow of longtime dictator Moamer Kadhafi, with rival political and armed groups battling for control.

Tensions have been running high between Turkey and nations that back Haftar, notably Russia, Egypt, Saudi Arabia and the United Arab Emirates.

Mankessim: Kenkey seller knocked down by a speeding vehicle ...
21 minutes ago