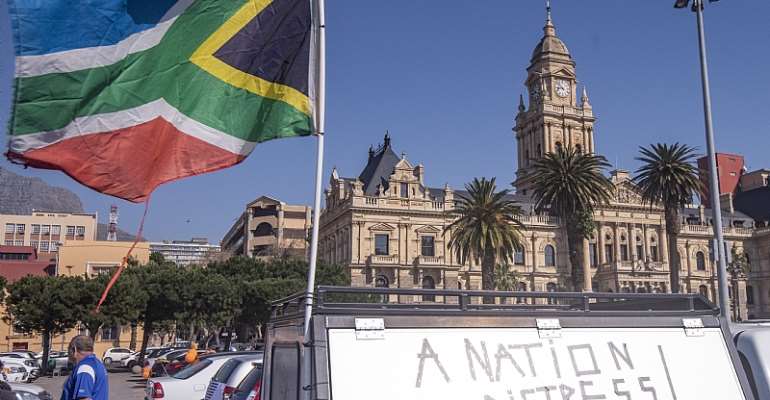 Increasingly, South Africa's President Cyril Ramaphosa's addresses updating the nation on the fight against COVID-19 reveal enervation. The pandemic's surging spread, which has placed South Africa among the five countries with the highest infections , has increased anxiety. The fear is discernible .

There's a lot of noise as various power holders in society seek to protect their interests. This is not surprising . But, when their reconciliation is elusive, social cohesion recedes.

The wrangling about what needs to be done is displacing the modicum of national cohesion that existed at the start of the pandemic. Initial efforts to fight it were impressive. South Africa earned the applause of many for this, including the World Health organisation (WHO).

In taking charge of the situation, including establishing and chairing a National Command Council to coordinate the emergency response, Ramaphosa acted swiftly to secure cross-party solidarity. The unanimity of the parties was a change from the political showmanship South Africans have become accustomed to.

But it needed more than just the support of opposition parties. The president knew this. In articulating the strategy of government he said :

If we are to succeed, every company, trade union, NGO, university, college, school, religious group and taxi association will need to play its part.

But the solidarity that state leadership had forged with various interest-driven groupings in society, including opposition parties, is coming apart at the seams.

Where did the country veer off course?

Interest-driven formations as power-holders in society

There were always murmurs against the national lockdown. They grew into public discontent when the lockdown was extended and the regulations adjusted.

In drifting away from the solidarity pact, the main opposition party Democratic Alliance (DA) gave public prominence to the muted disquiet. It wanted – and still wants – lockdown regulations relaxed for the economy to open up. This is what many sectors have called for, as the strain of the lockdown takes holds and jobs are shed.

Government did in fact ease the regulations. But not for long. The surge in infections led to some of the restrictions being reinstated; notably the ban on the sale of alcohol and a night curfew .

This set off a round of intense lobbying. For example, the restaurant industry is not happy with regulations on opening hours or a ban on the sale of alcohol. It continues to exert pressure on government for relaxations.

Tobacco sales remain banned . The industry's legal wrangle with the state is set to be protracted.

For its part, the minibus taxi industry extracted concessions , including its demand to be able to ferry passengers at full capacity.

The teachers' unions got their way in having schools closed, following the spike in infections. But this applies to public schools only. The private schools appear to have strongly lobbied to remain opened. Many are astounded by this inconsistency. The DA vowed to challenge government's decision in court, charging that it was irrationally made to appease the South African Democratic Teachers' Union. The union is part of the structure of the governing party's power in the tripartite alliance.

All these contestations seems to have thrown the state into disarray. The state is vulnerable because its capacity is weak. This has resulted in policy flip-flops such as the opening and closure of schools and the banning and unbanning of alcohol sales.

This begs the question of whether the focus is still on containing the spread of the pathogen or satisfying sectoral interests. The opposition parties are exploiting this for partisan interests.

But isn't this typical of societal heterogeneity?

Of course. Sectoral and partisan interests may be part of public interest. But they don't make up its entirety. Just because they are sometimes at variance with public policy doesn't mean they should be allowed to ride roughshod over public interest.

It is here that the ultimate test of statecraft lies: how to deal with contradictions of the pursuit of public interest.

Democracy is meant to serve public interest, and government should be the agency of this. For an interest to be public, it must have a wider societal resonance beyond sectoral or partisan purview. Public interest is about the commitment to satisfy all aspects of societal life.

Engaging beyond established power-holders to optimise decision-making and jolt citizens' conscience and consciousness should be the pillar of the state's strategy of “going public” in fighting the pandemic. This isn't happening, which might explain citizens' disobedience of safety protocols.

Flattening the curve of infections lies in influencing behaviour. This is the function of state leadership, which must assume a posture that's above partisanship and above sectoral interests.

In a democracy where the national executive authority is vested in the president, this becomes his responsibility, along with his ministers. The virtual imbizos (discussions) on the pandemic, which the president occasionally hosts to interact with the public, are a brilliant initiative. It should be optimised and complemented by other many platforms to ensure that state leadership remains present for ordinary citizens.

Technology has advanced to make all this possible and easy.

But the president should not simply be the conveyor of information at certain intervals. His leadership should assume the posture of advocacy, similar to the way he was the face of his party campaigning for its election. The aim then was to influence voter behaviour.

This time, the intention should be to influence the behaviour of citizens, in their response to COVID-19.

Regulations, as the function of state power, extract compliance by coercive means. But good leadership is a function of ingenuity – influencing people in a way that gets them to comply voluntarily.

Mashupye Herbert Maserumule received funding from the National Research Foundation for his postgraduate studies. He is affiliated with the South African Association of Public Administration and Management(SAAPAM).

Inside Politics: Political Quotes
Catch up with all the political quotes from our politicians.
Sponsored
More Article
Modern Ghana Links
Our 'whom you know' canker
Rawlings, The Tribute: The tenderness in his toughness
Ghana's unstable building problem is about more than lax regulation
How Kenya's new personal data protection law could affect researchers
Pasha 92: How we discovered two new giant radio galaxies
How young Kenyans feel about farming goes against conventional wisdom
Jonas Gwangwa embodied South Africa's struggle for a national culture
The approved covid-19 vaccines: Series of clinical trials is the way to go in Ghana
Why wait till I am no more?
Election Reports Quotes Dossiers
TOP STORIES