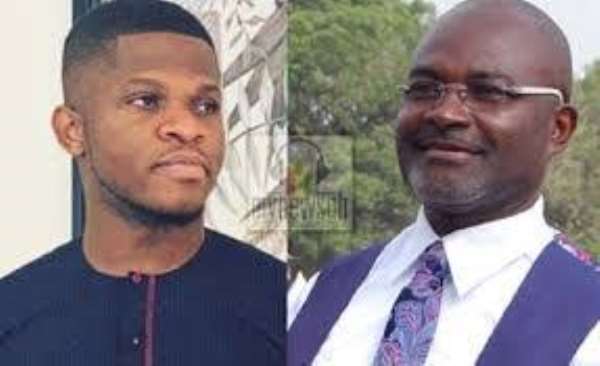 The National Communications Officer of the opposition National Democratic Congress (NDC), Sammy Gyamfi has formally filed a complaint against the Member of Parliament (MP) for Assin North, Hon. Kennedy Agyapong for threatening his life.

Kennedy Agyapong who is the Member of Parliament for Assin Central constituency in the Central Region; in an interview on Asempa FM noted that he can use just three seconds to switch off the light of Sammy George if he does not apologize to the President.

Not taking the matter lightly, Sammy Gyamfi has taken the life-threatening matter up with his lawyers who have officially filed a complaint to the Criminal Investigation Department (CID) of the Ghana Police Service.

A letter available at Modernghana News Desk from AB&M Legal Consult addressed to the Director-General of the CID has drawn the attention of the security service to probe the threats against the life of the NDC Communications Officer.

“We humbly request your good office to cause investigation to be conducted into the complaint herein, relative to the threat of harm and/or death by Mr. Kennedy Agyapong on our client’s life, both of which constitute serious offenses under the criminal offenses Act of Ghana, 1960 (Act 29)”, a portion of the letter reads.

Another part notes, “Having regard to recent history and notorious fact that, a prominent investigative journalist by name Ahmed Suale was shot and murdered in cold blood by some unknown criminals following similar threats made on his life by the same Mr. Kennedy Agyapong, our client as a law-abiding citizen feels compelled to formally write to you and lodge a complaint against the said Mr. Kennedy Agyapong, so as to avert a possible repeat of what happened to the late Ahmed Suale when his life was threatened by Mr. Kennedy Agyapong on that very "Ekosisen" platform and other media platforms”.

Read the full complaint letter below: