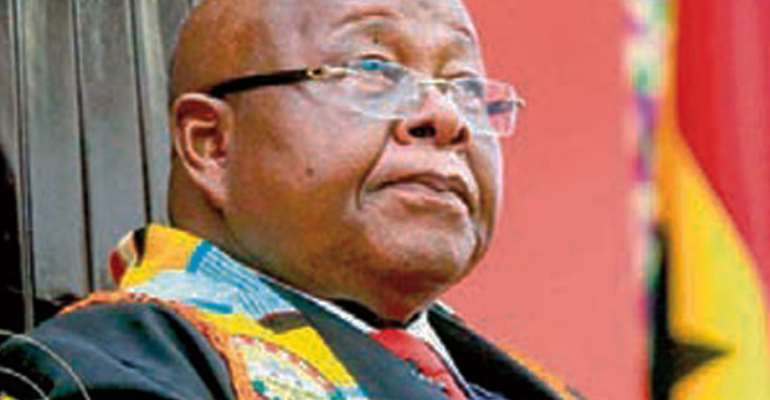 “Dr. Nkrumah did not alone compose the classical sonata and constitute the orchestra which sang Ghana's clarion call to independence in sweet melody, all in two months. The fathers of the nation were there already.” - Prof. Mike Ocquaye

PROFESSOR MIKE OCQUAYE'S golden speech at the second Founder's Day in Accra may have touched certain hearts—but, of course, not all hearts. That, we dare say, is human nature, and that is the baseline of democracy—'ka na menka bi' (talk, let me talk—loosely translated).

At least, historical records indicate that: the United Gold Coast Convention (UGCC) was the first political party formed in Ghana in 1947; that at the time of the formation of the UGCC, Kwame Nkrumah was schooling overseas (U.S.A. and U.K.); that it was Ako Adjei who recommended Kwame Nkrumah to the UGCC leadership to invite Nkrumah to assist the struggle; that the passage for Nkrumah's return to Ghana by sea was paid for by the UGCC – some insist it was paid by Paa Grant who was Nkrumah's family member and Paa Grant was a member of the UGCC; that when Nkrumah came back to Ghana, UGCC was there and he became its General Secretary… on and on and on, including being paid a monthly salary, provided a rented office, with a private car… So, why this unnecessary debate? It is lamentable that some people do not want to be told the historical truth, but allow themselves to be carried away by mere propaganda, just to bolster their personal agendas.

It is heart-warming that those who hanker after the truth got their desserts when August 4 was declared a Founders' Day holiday by Parliament by virtue of the new Public Holidays Act 2018 which amended the Public Holidays Act 2001. By the new Act, August 4 changed the Founder's Day (apostrophe before 's') which was a holiday that coincided with Dr. Nkrumah's birthday of 21st September.

As noted by Prof. Ocquaye, Dr. Nkrumah “played a big part in the struggle for independence” and so could be honoured with a holiday, “but it cannot be Founder's Day”. Recalling the historical facts, Prof. Ocquaye noted, “The road to independence may be mapped by five main eras: 1844 – 1872; 1873 – 1897; 1900 – 1924; 1925 – 1945; 1946 – 1957, all with brilliant patriots who chalked a golden pathway”. Thus, before the arrival of Nkrumah, “some gallant men were taking steps to lead Ghana to independence”. Why would anyone in his true Ghanaian posture not appreciate the roles of Paa Grant, J. B. Danquah, Akufo-Addo, Ako Adjei, Obetsebi Lamptey and William Ofori Atta? There is a common joke about J. B. Danquah asking for more drinks, because “Ako Adjei adi m'awu” (Ako Adjei has murdered me). Talk of the founding fathers' diverse contributions in the spheres of the economy, human rights, education, agriculture, social protection, …

It is true that in our social and political interaction, petty disagreements could arise, even with respect to the wording of minutes or reports. This cannot be said to constitute a political conflict or political impasse. There could have been petty disagreements, misunderstandings, et al which could have been resolved amicably. In any political struggle, such petty quibbles are to be expected BUT it is unfortunate that Dr. Nkrumah capitalised on such petty grounds to introduce the Preventive Detention Act (PDA) which saw the incarceration of Dr. J. B. Danquah at Nsawam Prison and his subsequent death there.

What lessons do we now living learn from the joint efforts of our fathers? As Professor Ocquaye points out, the attainment of independence on March 6, 1957 was made possible because of the collective resolve and untiring effort of the many front-liners who laid down their lives, to get the masses liberated. Thus, those of us now living need unity of purpose to develop the nation. We have to build this country ourselves, and we have decided to follow the democratic path, and as the Preamble of the 1992 Constitution spells out: “In the name of the Almighty God, We the People of Ghana, In exercise of our natural and inalienable right to establish a framework of government which shall secure for ourselves and posterity the blessings of liberty, equality of opportunity and prosperity… And in solemn declaration and affirmation of our commitment to Freedom, Justice Probity and Accountability; the Principle that all powers of Government spring from the sovereign will of the People… give to ourselves this Constitution.”

Unlike the 1965 Constitution under Dr. Nkrumah which rendered Ghana a one-party state (no opposition, especially targeted at the United Party), the 1992 Constitution has an entrenched clause which says in Article 3 (1) Parliament shall have no power to enact a law establishing a one-party state. Furthermore, Article 12 (2) of the 1992. Constitution provides that: “Every person in Ghana, whatever his race, place of origin, political opinion, colour, religion, creed or gender shall be entitled to the fundamental human rights and freedoms of the individual…”

It is noteworthy that Professor Oquaye's lecture was chaired by Yaa Naa Abubakari Mahama II, the Overlord of Dagbon. Speaking through the spokesperson, Zambgali Naa Dr. Jacob Mahama, Yaa Naa Mahama paid glowing tribute to all those who played various roles in helping Ghana to attain its independence.

Participants at the function must have got satisfaction from what was delivered. Mrs. Akosua Frema Opare, Chief of Staff/ Mr. Osei Kyei Mensah Bonsu, the Majority Leader and Minister for Parliamentary Affairs; Dr. Owusu Afriyie Akoto, Minister of Food and Agriculture; Mr. Kojo Oppong Nkrumah, Minister of Information as well as Mr. Roland Affail Monney, President of the Ghana Journalists Association (GJA), were all at the function where their political appetites which had been whetted over the period was finally satisfied.

The Speaker tasks Ghanaians to sacrifice for national development. It is when all of us as Ghanaians have drawn lessons from the sacrifices made by the founding fathers that we shall work together and be able to develop the nation. This is not to say, opposition shall be gagged, or that people will be deprived of their right to their personal freedoms, as in Article 21: “All persons shall have the right to (a) freedom of speech and expression, which shall include freedom of the press and other media; (b) freedom of thought, conscience and belief, which shall include academic freedom; (c) freedom to practice any religion and to manifest such practice; (d) freedom of assembly including freedom to take part in processions and demonstrations (e) freedom of association, which shall include freedom to form or join trade unions or other associations, national and international, for the protection of their interest; (f) information, subject to such qualifications and laws as are necessary in a democratic society; (g) freedom of movement which means the right to move freely in Ghana and immunity from expulsion from Ghana.” We have to move forward together just as the founding fathers did.