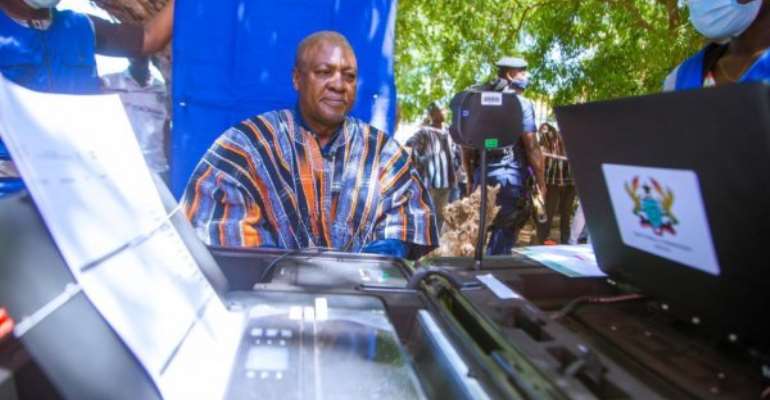 Former President John Dramani Mahama, Flagbearer, National Democratic Congress (NDC), says he will build a just and equal society where all Ghanaians will benefit from opportunities.

He said the next NDC administration would bring back the peace and unity of Ghana by making all Ghanaians feel that they belonged to the country, especially as no group of persons owned Ghana more than others.

A statement issued by Mr James Agyenim-Boateng, NDC Campaign Spokesman, which was copied to the Ghana News Agency, said former President Mahama made the comments when he addressed the media after registering for a voter ID card in Bole in the Savanna Region on Wednesday.

Former President Mahama said the Akufo-Addo Government was dictatorial and intolerant of dissenting views, adding that its closure of radio stations, harassment of journalists and the alienation of some ethnic groups, including questioning their Ghanaian citizenship, does not bode well for Ghana's democracy, as well as the peace and stability of the country.

He said the deployment of soldiers by the government to prevent eligible Ghanaians from registering in the ongoing registration of voters was a sign of desperation by President Nana Addo Dankwa Akufo-Addo and a government who do not care about handing over a peaceful and united country.

Former President Mahama said the only way to stop the government from further dividing Ghanaians and toying with the peace, stability and unity of the country was for all eligible voters to be resolute and register for their voter ID cards, despite the machinations by the government to disenfranchise them, so that they kick them out on 7th December.