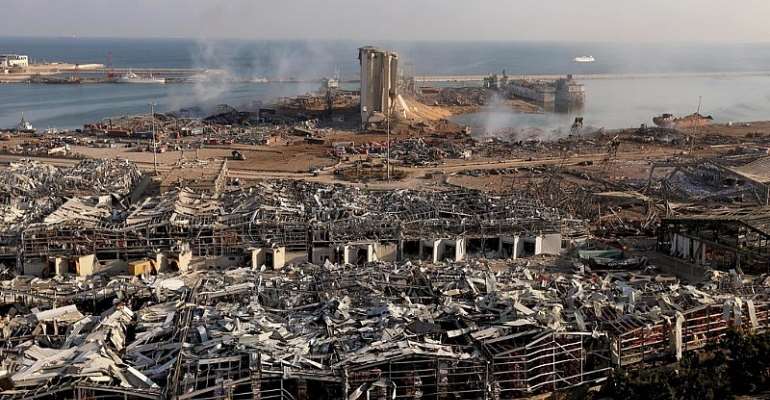 France is among the many countries sending aid and search teams to Beirut on Wednesday as the death continues to rise after an explosion at a warehouse in the capital's port on Tuesday sent a blast across the city, killing at more than 135 and injuring more than 5,000 people, with many still missing.

Lebanon's cabinet has declared a two-week state of emergency, giving security control to the military.

Rescue workers searched for survivors amidst the wreckage. They are being helped by Turkey's Humanitarian Relief Foundation, who are digging through debris to find people and recover bodies.

The blast was felt all the way to Cyprus, an island almost 200km away.

The government says the explosion stemmed from 2,750 tonnes of ammonium nitrate, which is used as a fertiliser, but can also be used to make explosives, that was seized at the port in 2014.

All port personnel who have worked since 2014 are under house arrest while the blast is being investigated, in what officials believe was due to negligence.

France has also decided to open an investigation into the explosion after Paris prosecutor Remy Heintz said that at least 21 French citizens were wounded in the incident.

Anger, sadness
Many Lebanese are upset at the government as the port is the main entry for food imports. Lebanon is suffering an economic crisis and fears that people could go hungry, including some nearly one million Syrian refugees.

The government has allocated 100 billion Lebanese pounds, or approximately €55 million (according to the official exchange rate) to deal with the crisis, but the money on the parallel market would only be worth €10 million..

Governor Marwan Abboud told Lebanese media that the blast has caused between €2.5 to €4.2 billion in damage.

In addition to the economic hardship and pandemic, a UN-backed tribunal in the Netherlands is set to announce the verdicts on Friday of the four Hezbollah members who were charged in absentia with collaborating in the 2005 assassination of former Lebanese prime minister Rafik Hariri.

France pledges assistance
France's President Emmanuel Macron will be flying to Beirut on Thursday to meet politicians and government officials, while two planes filled with 55 security personnel, 10 emergency doctors and six tonnes of health equipment traveled on Wednesday to help the strapped Lebanese hospitals in and around Beirut.

Included on the planes are emergency experts with chemical and technological specialties who can work in damaged industrial sites and identify if there are other risks in the area, said France's national security spokesman Michael Bernier.

Macron's office said French peacekeepers who are stationed in Lebanon, have been helping since the explosions.

International effort to help Lebanon
Indonesian peacekeepers, also part of the United Nations Interim Forces in Lebanon (UNFIL) are also helping to evacuate civilians, although there are a number of UNFIL peacekeepers injured, who were at the port at the time of the explosion.

The European Union is activating its emergency system across its 27 member states, as it plans to send more than 100 firefighters and vehicles and sniffer dogs for people trapped in urban areas. The Czech Republic, Germany, Greece, Poland and the Netherlands as well as France have said they are participating in this effort and other countries are expected to join.

The EU is also using its Copernicus special satellite mapping system to establish the extent of the damage, according to Crisis Management Commissioner Janez Lenarcic.

Tunisia is sending two planes of food and medical aid, and Tunisian President Kais Saied announced that the country could take 100 people to be treated in their hospitals.

Cyprus is sending two helicopters, 10 rescuers and eight rescue dogs, and has offered to repatriate any Cypriots who want to return—50 have reportedly already taken the offer.

Australia says it will donate €1.2 million in humanitarian support through the World Food Program and the Red Cross for Lebanon.

The World Health Organization says it is airlifting medical supplies to Lebanon on Wednesday for 1,000 trauma interventions, including burns and wounds, and supplies for 1,000 surgical interventions.

The supplies are made after a request for help from Hamad Hasan, Lebanon's health minister.

Help from within
Lebanese have opened their homes to the more than 250,000 people who have been made homeless due to the blast, using the hashtag #OurHomesAreOpen in Arabic and English on social media. Spare beds and empty properties have been offered to the victims.

Those in need have gone to ThawraMap, (Revolution Map in Arabic) on Instagram and twitter, showing a map of the locations offered, including in hotels. ThawraMap is usually used to show where protests are in the capital.

Many who remember the civil war from 1975 to 1990 have been also offering to transport people and give shelter in their homes. The contact information of doctors who could suture wounds sustained in the blast was also being given.

Some diplomacy in dark times
Although Israel is still in a state of war with Lebanon, Israeli Prime Minister Benjamin Netanyahu, offering condolences to the people of Lebanon, said that Israel had offered aid through the United Nations.

"Tonight we will illuminate the city hall with the Lebanese flag," said Huldai on social media.

"Humanity precedes any conflict, and our hearts are with the Lebanese people in the wake of the terrible disaster that befell them," he added.

In addition to the Covid-19 pandemic and the economic crisis hitting the country, there had been raised tensions between the Lebanese Shiite Hezbollah group and Israel in recent weeks.

Those in Khan Yunis, a city in the occupied Palestinian Territory of the Gaza Strip, have organized a blood drive to help Beirut casualties and are working with the Red Cross and Red Crescent to deliver the blood to Lebanon.