Why we're working to put Africa's jellyfish on the map

By Verena Ras - The Conversation 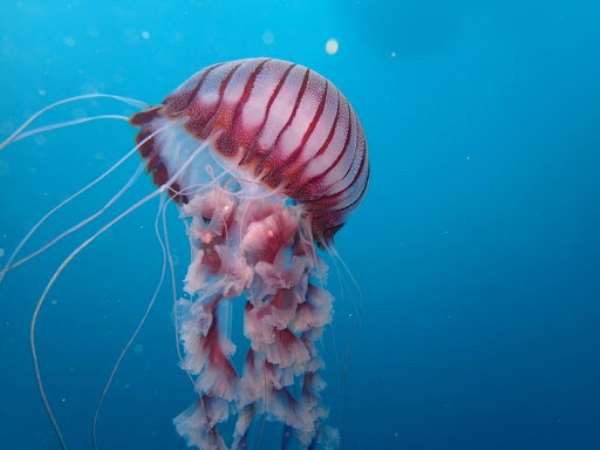 Jellyfish can be found in almost every ocean in the world. These beautiful, graceful creatures are a sight to behold; their swift, pulsating motions gently propel them through the water. But the scene can quickly turn ominous as the animal transforms into a ferocious, formidable predator .

These creatures have no special organs for respiration or excretion. They have no head, no brain, no skeleton and no true circulatory system. This allows them to be highly adaptable and to survive in even the harshest conditions.

Most species typically have a multi-phase life cycle. Many jellyfish can exist as polyps on the sea floor, able to create identical clones of themselves. When conditions are just right, polyps are able to release numerous juvenile jellies into the water. Many polyps may even lie dormant when conditions are not favourable, emerging again when they improve. The free-swimming adult jellyfish often eat a variety of marine species from tiny shrimp to small pelagic fish. Many even eat other jellies. The adult jelly can also shrink when food is not available to conserve energy and resources, growing back to its normal size when food becomes available again. This unique life history gives them many advantages over other species.

Jellyfish are also well known for forming large swarms known as “blooms” – which can have far reaching negative effects . Jellyfish blooms have clogged the cooling intakes of power plants, resulting in total shutdowns; they can destroy fishing nets and spoil catches. Many species also deliver a painful sting that many beach-goers may know well.

But despite some of these negative impacts, jellyfish are incredibly useful. They are indicators of oceanic circulation patterns, play a rather large role in the mixing of oceanic nutrients and also help control pelagic fish populations. It was recently discovered that jellyfish even provide microhabitats where other marine species may live and survive.

Jellyfish have also recently become the focus of a number of biotechnology and pharmaceutical studies as they appear to possess many properties that may be useful in a variety of applications, from household cleaning products to fertilisers. Other species are now commercially farmed for human consumption, with large fisheries already established in countries like India and China. Jellyfish are being turned into products like dehydrated chips, protein shakes and other food stuffs.

However, with few dedicated research efforts, jellyfish remain unexplored in many oceans and it is likely that many species have gone unrecorded or unnoticed. Some scientists even suggest that their numbers may be declining in some parts of the world. Global longterm data simply doesn't exist for jellyfish, so scientists struggle to predict, track and mitigate their potential effects – good and bad.

But collecting the necessary data requires significant resources, manpower and expertise. That's where a South African-led team of researchers based at the University of the Western Cape's Department of Biodiversity and Conservation Biology comes in. Using samples collected by a global research vessel, we've been able to begin to establish a baseline of data for African jellyfish species. This, we hope, will allow us to establish more thorough trends across oceans, uncover new species (we've already identified one ) and better understand the links between different species.

In 2016, we approached the Food and Agriculture Organisation's EAF-NANSEN Programme to see whether jellyfish samples could be collected by its Dr Fridtjof Nansen research vessel. EAF-NANSEN agreed , and started collecting samples in waters across the African continent.

The first specimens arrived at UWC late in 2017 and we got to work. Jellyfish have few identifying features and a highly variable body type. So figuring out which species we had in the lab was no easy task. The team typically measures anywhere from 35 to 70 morphological features for any given species, which are then analysed statistically for patterns. DNA is also extracted from various individuals and populations to help identify species and to establish patterns of gene flow across populations.

So, what have we learned? First, it became clear early on that the African coastline encompasses a larger variety of species than previously thought. Our group has already found a new compass jelly off the southern coast of South Africa, along with a new species of rhizostome jellyfish that appears to be completely endemic to South Africa through some of our previous research. University of the Western Cape masters student Roxy Zunckel swims with the jellyfish Rhizostoma luteum. Supplied

Second, the team has begun to identify a number of other African morphotypes that appear to be distinct from their global counterparts. The species found here appear to show high levels of endemism, meaning they are changing in their physical appearance and even their DNA to adapt to our waters.

The work is continuing and we have already received three years' worth of specimens and associated data which we hope to analyse alongside other African jelly experts.

The aim of this work is to build up and establish high quality resources for African jellyfish species that may be used to contribute to global studies and reviews. Eventually, we hope to establish population patterns across the east and west African coastlines; at the moment these data simply don't exist. This will require a coordinated global effort, but as we've shown through our collaboration with the NANSEN programme, this is possible and it's yielding great results.

This work was supported by the National Research Foundation, the NRF-Royal Society (London) SET Development grant in Zoology to the University of the Western Cape; and the Canon Collins Trust (S.N., grant number Nee 1500).

By Verena Ras, PhD candidate, University of the Western Cape

Latest Photo Reports
Catch up with all the political quotes from our politicians.
Advertise here
More Article
ModernGhana Links
Ghanaian farmers are becoming impoverished under Akufo Addo and Bawumia government; Check The Records
Prayers, Preparation, Patience, Praises, and PEACE: Introduction to the 5ps of Life for the 21st Century’s Peace
The Use Of Advertising Appeal In Breast Cancer Awareness Month
﻿#EndSARS: Memorialization or Fanfarization?
Thoughts Of A Nima Boy: Ayisha Abdallah Asks, ‘Ever Held The Hands Of The Sick, The Old, Bedridden Or Dying Person?
Open letter to celebrities: Celebrity lifestyles and mental illness: The case of Funny Face
International Day of the Girl Child: The need to promote the development of the Girl Child
A Critical Perspective Evaluating The Cpp
The Reality Of Party Factions And Power Blocs!
TOP STORIES