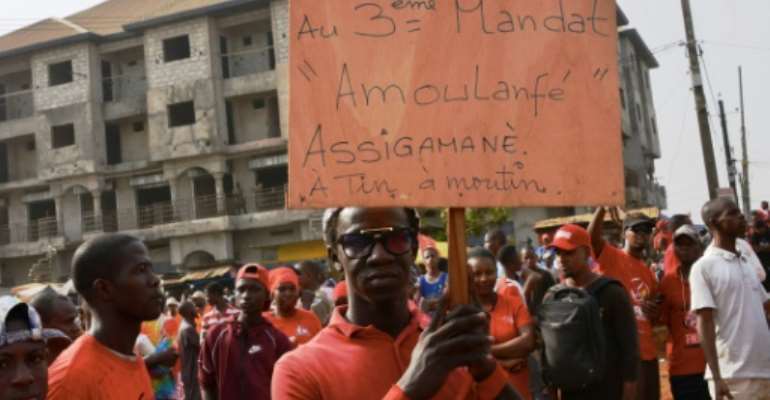 Protest: A man holds up a placard reading 'No to the 3rd term' in an anti-Conde rally in January. By CELLOU BINANI (AFP/File)

Guinean Prime Minister Kassory Fofana on Wednesday proclaimed his support for President Alpha Conde at a party convention likely to confirm whether he runs for a third term in office, a scenario that has stirred bloody protests in the West African state.

Fofana made the appeal at the start of a two-day convention of the Rally of the Guinean People (RPG) to select a candidate for a presidential vote expected in October.

"This convention is being held at a particular time, when the world faces the COVID-19 pandemic and where violence is widespread," Fofana told around 350 delegates gathered in the parliament building in Conakry.

"The difficult times are menacing, but I am sure we will emerge victorious under the leadership of President Alpha Conde."

Conde is near the end of his second five-year term in office -- the maximum under the old constitution, which has just been revised and approved by a referendum.

Critics say the changes are a ploy to enable the 82-year-old to reset his time in power.

Under the new constitution, presidential terms are also limited to two but extended from five years to six, which could theoretically enable Conde to govern for another 12 years.

Conde was a long-time dissident under iron-fisted regimes that ruled Guinea after it gained independence from France in 1958.

He came to power by the ballot box in 2010 -- a first in a country with a chronic history of military coups.

Voters returned him to office five years later, although his opponents say his presidency has since lurched towards authoritarianism.

Protests over suspicions that he sought to engineer a third term erupted last October, triggering clashes costing dozens of lives.

Conde himself has been ambiguous about whether he intends to run again, saying that it is "the party which will decide."

Delegates to the convention were tested for coronavirus before they attended.

Many said they enthusiastically supported the presidential incumbent.

"This is the convention which will anoint Professor Alpha Conde. We want him to be our candidate," said Fantamady Diakite, a delegate from the central region of Upper Guinea.

The electoral commission has proposed that the presidential poll be held on October 18, but Conde has yet to issue a decree to confirm a date.

On the eve of the convention, a group of dissidents said they had filed a lawsuit in France accusing Conde and others of corruption, money laundering and influence-peddling.

The complaint, they said, focuses on a bauxite concession awarded to a French mining company called AMR.

In a statement issued Wednesday, AMR (Alliance Miniere Responsable) rejected accusations against it as "completely fictitious."

Allegations that AMR had sold the concession to a French-Chinese-Singaporean consortium were particularly wrong, as this contract was for a partnership, it said.

"Our company has always and will continue to work in compliance with Guinean and international law," AMR said.