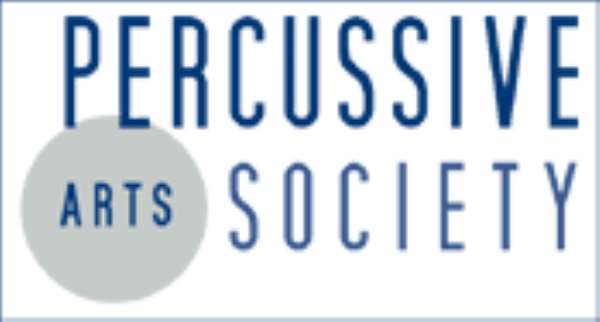 The Ghana chapter of a US based world renowned music service organisation , the Percussive Arts Society (PAS) has held its third Ghana Day of Percussion at New Edubiase in the Ashanti region.
The three-day event which took place from 23th to 25th July, 2006 was crowned with a durbar of chiefs and performers at the forecourt of the New Edubiase Community Centre on the 25th July, 2006. The Ghana PAS hosted the event in collaboration with the International Center for African Culture and Arts (ICACA-Ghana),the Centre for Human Development & Social Change, Ghana and the Adansi South District Assembly.

The Ghana chapter, which is the first on the continent of Africa, is under the presidency of Mr. Harold Akyeampong, an ethnomusicologist and a lecturer based in the USA. According to him, the Percussive Arts Society is a music service organization dedicated to percussion ( drumming) preservation, education and promotion. He said in the USA, the focus of the PAS is on drum line, timpani, marima and drum set popularly known in Ghana as jazz drums.
Days of Percussion (DOP) according to Mr. Akyeampong are special days set aside by the parent PAS to bring together percussion teachers, students, professional and community performers to play, share, and network for the promotion and preservation of percussion throughout the world. International chapters have the mandate to organize events to meet and promote local percussion needs. It is in line with these flexibility and the need to reconnect with our dying cultural values that the planning committee for this year's festival chose the Adansi South district for this important event. The festival dubbed the Adansi South Cultural Expo aka Drum & Dance 2006 attracted some International delegates and performers from the United States of America.

Among the star attraction performing groups were the Africana Dance Company from Accra led by Sir Mawutor, the Edubiase Owoaman Cultural Troupe, the resident group of the Centre for National Culture, the Akrofuom Kete Group and the Tweapease Gahu group. They all took turns to perform and performances were interspersed with speeches by special speakers.
Among the dignitaries who graced the occasion were the leaders of the US delegation, Dr. Kwaku Walker of Bowie State University, Dr. Kwabena Ashanti of North Carolina State University and Mr. Harold Akyeampong the Ghana chapter President who is a resident of the US. Others were His Excellency Hon. Appiah-Pinkrah, Member of Parliament for Adansi South Akrofuom constituency, Nana Guahyia Ababio, New Edubiasehene, Mr. Samuel Francis Adjei, the regional director of CNC and Francis Kudjoe Dorpenyoh, the Adansi South District Chief Executive, Mr. Wisdom Agodza of Radio Mercury, Kumasi and Mr. M. K. Ato Brown of Radio Peace, Winneba were the Masters of Ceremony.

The special guest of honour were the US delegates led by Dr. Kwaku Walker, a professor and chair of the English Language and Literature Department, Bowie State University, Maryland. Before he delivered his speech he excited the audience with his special dexterity in playing Kete drums with Harold Akyeampong and with the Owoaman Cultural troupe. During his speech on behalf of the delgates, he took the opportunity to educate the public on the importance of culture and the need for all people to come together to help in the country's development. He also appealed to the people to welcome warmly all the African Americans who want to come back to Ghana to reconnect to the great cultural values of the nation. He continued that Africans have a legacy that the West is now spending money and time to study. So it is very important that occasions like these be organised frequently to sensitise the people of its importance. He appealed to the people to stop calling African American tourists Obroni because they are not white or Caucasians.
In a speech read on his behalf Nana Guahyia Assiama, the Edubiasehene lauded the academic and artistic delegates and Mr. Akyeampong for bringing such an important programme to his community. He said that he would give all support s to make the linkage a long lasting and of mutual benefits to the two countries.

During his speech, the Honourable Appiah -Pinkrah, the Akrofuom Constituency MP of Adansi South called on all to embrace the culture for the nation to make progress and for development to take place peacefully. He also promised the US delegates that the community would offer any help to them to make the proposed International Cultural Exchange Programme a reality.
In his speech made in distinct akan twi reminiscent of an Okyeame, honourable Francis Kudjoe Dorpenyoh, the Adansi South District Chief Executive said he was so excited that history is being made during his tenure in the revival of valuable cultural practices. He said that the delegates from the US mean a lot to the community, thus apart from the cultural significance means that the community is catching the international attention for progress. He promised that the Assembly will offer all the necessary support to ensure that the Expo becomes an annual affair with enormous impact on the people especially the youth.

Mr. Samuel Francis Adjei, the regional director of the Centre of National Culture in his speech expounded on the importance of our culture, especially with drumming. He promised that the office will support districts to preserve and promote the culture. He also educated the people on the important roles of the cultural personalities.
Mr. Willie Klutse, a director of the Adansi South district office of the National Commission for Civic Education (NCCE) took the opportunity to educate the public on the forth-coming district assembly elections in Ghana. He appealed to everyone for political tolerance and referred to the drum ensemble as a unifying example that we should all emulate by playing together, irrespective of one's background or political leaning.

He said “people of different political views are not enemies, but all components in the development of democracy, therefore we should accommodate the opposing views”.
Mr Dag Kofi Akyeampong, an ex-Assembly man of the Mfantseman district and the acting director of the Centre for Human Development & Social Change, Ghana appealed to the youth to master their craft very well because drumming like sports has become very lucrative and is now economically rewarding. He also advised them to secure the best formal education they can get before they can mature into better professionals and instructors.

Mr. Harold Akyeampong, the president of the Ghana chapter, who is also the International Director of the International Centre for African Culture & Arts, ICACA-Ghana interspersed his speech with a performance and serious cultural messages. He discussed and educated the community on the importance of culture. He also appealed to all interested drummers) to register with the Ghana chapter, become members and to take advantage of the enormous benefits that the organisation has to offer.
He mentioned that the African performing arts, especially percussion that falls in the world music curriculum is receiving more attention in the west. This is creating a demand for quality native instructors and teachers. He said Ghana has the potential to meet that need. To meet that demand, he said the plans and proposal to establish the first percussion school in Kumasi is in progress. He stated that the choice of the Kumasi is very relevant as it is centrally located and to live up to its accolade the cultural capital of Ghana.

He appealed to the government, various foreign embassies in Ghana, international organisations and local NGOs to lend support in realising such a laudable goal. He also took the opportunity to thank all the attendees of the three-day event. He later appealed to everyone to prepare for the 2007 Day of Percussion that would attract a number of international percussionists, teachers, students and performers from all over the world including countries such as Germany, Singapore, Argentina, United KingdomK, Grenada and the USA.
The success of the 2006 has led to a number of district cultural offices making an appeal to the Ghana Percussive Arts Society and the International Centre for African Culture & Arts to consider hosting the subsequent ones in their districts. Among the districts are Offinso, Assin South and Kwabre. According to Mr. Akyeampong, this is a good sign and hopes that should all regions host such festivals, its cumulative impact on the people will be long lasting.